(CNN) -- Amir was a salesman before being arrested and taken to the infamous Abu Ghraib prison in Iraq in 2003. During his time there, he says, he was forced to lay down in urine and feces, stay naked in his cell for days, and "howl like dogs do" while being pulled by a dog leash. According to his accounts, he was also sodomized with a broomstick and had his genitals stepped on. 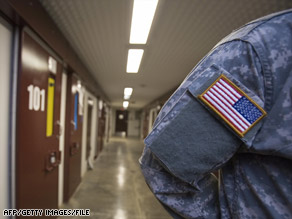 A U.S. miliary guard stands inside the Camp V area at the U.S. Naval Base in Guantanamo Bay, Cuba, in 2006.

After his release from Abu Ghraib in November 2004 -- without being charged -- he had a slew of physical and psychological ailments, including symptoms of post-traumatic stress disorder, according to Dr. Allen Keller, director of the Bellevue/NYU Program for Survivors of Torture. Keller testified at a U.S. Helsinki Commission briefing in July 2008.

"It's like in my head I have never left Abu Ghraib," Keller says Amir told doctors.

Keller and his colleagues testified they found physical and psychological evidence of what they called "torture" during medical evaluations of former detainees of the Abu Ghraib prison in Iraq and the military detention center at Guantanamo Bay, Cuba.

President Obama denounced "brutal methods" of interrogation in a national security speech Thursday, asserting they undermine the United States' war and counter-terrorism efforts and "alienate us in the world." In January, he issued an executive order banning torture, and plans to shut down the Guantanamo Bay detention center.

The psychological effects of torture can often be worse than the physical effects, said Ellen Gerrity, assistant professor of psychiatry at Duke University and co-editor of "The Mental Health Consequences of Torture."

Watch more on the psychological and physical effects of torture »

"The psychological symptoms can often be worse in the sense that person can never recover from that, and may in the end, be in such despair and pain that they take their own lives, especially if they don't have treatment or support around them," she said.

They may also show an impaired immune system and have a higher incidence of cancer, said Rosa Garcia-Peltoniemi, senior consulting clinician at the Center for Victims of Torture in Minneapolis, Minnesota.

Clients at the Center for Victims of Torture show a high rate of head injury, which can lead to neurological symptoms and other dysfunction, she said.

The mistrust survivors feel may even carry over to the next generation, with children observing their parents keeping secrets and feeling shame, Gerrity said.

"It's very hard to regain a sense of trust in the world, and in the environment, even [in] themselves if forced to participate in actions that they are ashamed of and would never have done," she said.

Treating the aftermath of torture

Treatment centers across the U.S. are starting to offer assistance to survivors of torture.

The Center for Victims of Torture, the first center of its kind in the United States, offers psychological services such as individual and group counseling, as well as medical treatment, physical therapy, and social services. The majority of clients come from Africa and were highly educated, accomplished leaders who were persecuted in their countries, Garcia-Peltoniemi said.

The healer and the torture survivor must establish trust so the survivor can better understand what happened and forgive others, as well as himself or herself, Gerrity said. Bearing witness to the story is a large part of the healer's role, she said.

The role of psychologists in the interrogations themselves at detention facilities has been controversial. One former Guantanamo detainee Keller evaluated, called Youseff, said a psychologist exploited their conversations about his sadness over being separated from his family, Keller said at the U.S. Helsinki Commission briefing.

Reports of mental health professionals' involvement in torture have led some psychologists, such as Gerrity, to criticize the American Psychological Association.

The APA has always opposed torture or cruel, abusive interrogation techniques, said Kim Mills, spokesperson for the APA. She said the organization's position used to be that psychologists could be present during interrogations that were ethical, but could not be present if torture or abuse was taking place, although they could intervene if possible, which did happen in some cases.

The APA amended that view last year to state that psychologists cannot be present in detention sites in violation of U.S. or international law, unless working for a third party on behalf of detainees or treating military personnel, Mills said.

But Gerrity said psychologists have been involved in deciding which torture tactics to use at Guantanamo. She and others have written position papers urging the APA to take a harder stance on mental health professionals' involvement with interrogation.

"I think there is a tremendous need for educating psychologists about human rights and about this particular issue of torture and the use of torture in interrogations," said Garcia-Peltoniemi. "The behavior that has been reported shows a tremendous lack of regard for the historical evidence and for science."

Having had mental health professionals involved in torture can even damage the survivors' abilities to recover, Gerrity said.

"When and if they're brought to safety, and it's time to have their physical and psychological wounds treated, they have to turn to someone in a white coat, someone who calls themself a mental health professional, the very profession that betrayed them back when they were being tortured," she said.