Many women put pregnancy plans on hold in shaky economy

Diana Adam, 35, and her husband wanted to have a second child this year. The timing just seemed right. She had a job as a software engineer at a big market research company near San Francisco, California, and it had good benefits -- including paid maternity leave. He was looking for a faculty position after finishing his Ph.D. in sociology but had a steady job as a lecturer at a state university. Their first child, a boy, was three. 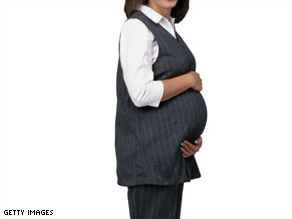 Survey: 17 percent of married women said the shaky economy affected their plans to increase their family.

But that was before the economic meltdown. Since then, her husband's hours were cut at work and may dry up completely in the fall. At least half of the faculty positions he's applied for were cut due to hiring freezes. Adam herself survived a round of layoffs at her job, but still doesn't feel completely secure. "Right now we are postponing [a pregnancy] to definitely next year at the earliest," Adam said.

Adam and her family are not alone. Nearly one in five married women ages 18 to 44 say the shaky economy has affected their plans to increase the size of their family, according to a survey released in May by the American College of Obstetricians and Gynecologists (ACOG). Nearly one in 10 say that they put off a planned pregnancy because of the bad economy.

Meanwhile, urologists have noticed a spike in men seeking vasectomies, and Planned Parenthood clinics report that more women are calling to ask for help paying for their birth control. Organizations that help low-income women pay for abortions say they're getting more calls, too. Health.com: Birth control is safer than ever

"There is no doubt that the economy is directly affecting the women in our community," said Jenifer Vick, the director of development and communications at Planned Parenthood of East Central Iowa in Cedar Rapids.

ACOG's poll found that 17 percent of married women said the economy had "affected their plans to increase the size of their family," and 20 percent said they were more concerned than they were last year about having an unplanned pregnancy. While about one-third of women said they were paying more attention to their contraceptive use for this reason, 14 percent had put off getting their annual well-woman checkup, and 15 percent were cutting back on some of their medications or just not taking them anymore. The online survey was conducted between March 25 and April 1, 2009, and included 1,031 women ages 18 to 44.

The results are particularly distressing, said Dr. Iffath Abbasi Hoskins, because most women of reproductive age rely on their ob-gyn for primary care as well as their reproductive health. Hoskins said the physician group commissioned the survey from the Gallup Organization because patients were telling its members that economic pressures were affecting their choices about family planning and health care. Health.com: Have your best gyno visit ever

"The downturn in the economy is having unintended consequences, and these consequences are affecting the most personal and intimate areas of a woman's life," said Hoskins, who is vice president of ACOG and chairs the department of obstetrics and gynecology at Lutheran Medical Center in Brooklyn.

A March report suggests that vasectomy rates are increasing as well. Urologists at the Cornell Institute for Reproductive Medicine in New York City and their colleagues reported that consultations for vasectomies were up 48 percent to 75 percent compared to recent years and months.

Last fall, Planned Parenthood of East Central Iowa qualified five or six women weekly for a state program that offers free birth control, annual Pap smears, and other reproductive health-care services to those who meet the income guidelines. Now, according to Vick, the clinic is qualifying five or six women every day, while 10 to 20 women call daily looking for help paying for health care and contraceptives. Health.com: Do pregnancy and bipolar disorder mix?

"Just this week, there was a woman who came in saying that her company has decided to cut their expenses by raising the deductible on their insurance plans. She said she can't afford the $500 deductible. Our clinic staff is seeing how they can help her access the contraceptives she needs," Vick said. "Some women are coming in saying that they are in fear of losing their job/health insurance and that they want to know what we can do to help if this does happen. These women know we're here and don't know where else to go."

Toni Bond Leonard, who runs the Illinois Reproductive Justice Fund, which helps women pay for abortions, said more women are looking for help, while the fund's donors are having to cut back on their support. When women call the Chicago-based fund, Leonard said, they are asked whether they can pay some of the cost. Callers used to say they could contribute $50 to $100. A first-trimester abortion costs $365, on average, in the Chicago area, Leonard said.

"Now women call and they have nothing," she said. The fund typically asks a woman to try to raise some money on her own, and then call back, Leonard added. "Women aren't calling back because they just can't raise anything."

While hard numbers are difficult to come by (the most recent U.S. data on abortion rates are from 2005), the Boston-based National Network of Abortion Funds says most of its 102 member funds reported a 50 percent to 100 percent increase in call volume over the past several months. Call volume to the National Network's offices, which refer women to local funds and the network's national case manager, has tripled. Health.com: 6 Rules for a healthy postpartum slim down

"In the Network offices, since the first of the year, the increased desperation has been notable," the NNAF said in a March press release. "It is now common for staff to pick up the phone to hear sobbing and gasping women who have tried everything they can think of to raise enough money for an abortion, are still coming up short, and are at the breaking point emotionally."

Will the poor economy lead to a "baby bust"?

The rates of reproduction have fluctuated with the economy in the past, according to the Population Reference Bureau. In fact, senior demographer Carl Haub wrote on the Population Reference Bureau's blog that the U.S. has seen two big "baby busts": once during the Great Depression, and a second time in the recession-ridden, oil embargo--plagued 1970s.

The total fertility rate, or the average number of children born to a woman during her lifetime, fell to 2.1 by 1936, and declined to an "all-time low" of 1.7 in the 1970s, according to statistics from the bureau. Total fertility eventually rebounded and has held steady at 2.0 to 2.1 for the past several years, Haub wrote, but it's too early to tell what the impact of the current slowdown may have on birth rates. Health.com: Post-pregnancy workout tips

Meanwhile, Diana Adam and her husband are planning to hold off on adding to their family until he lines up some steady work. It doesn't have to be full-time, Adam says, but it does need to be dependable. Last year the family could plan on him teaching a couple of classes each semester, and one during the summer session. "We knew what we could expect; now it's more about, 'Let's see,'" Adam says. "It's all a last-minute decision, and you can't plan anything on this."

Adam said she hopes the wait won't be too long, because having a baby closer to 40 "gets me nervous a little bit."

"I don't want to delay too much," she said. "You never know how long it actually takes sometimes to get pregnant."

All About Sexual and Reproductive Health • Birth Control • Women's Health