(CNN) -- It has been almost 30 years since Maggie Rajnic lost her leg in a motorcycle accident. Since that time, she's tried to stay competitive, not allowing her disability to alter her life. 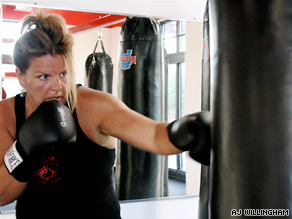 Maggie Rajnic says group boxing class helped her develop "a a fitness component to my body."

But for years Rajnic has been looking for a way to improve her strength and endurance. Four months ago she found it at the LA Boxing gym in Rockville, Maryland.

Designed to teach responsible and injury-free boxing, the gym offers group sessions in the sport, which is much like an aerobics class but with punch.

Combining boxing, kickboxing and a mixture of martial arts, class participants use bags, jump ropes, weight machines and funky music to get fit. Although the gym offers one-on-one sparring as well, the gym's manager, Felix Pagan, said many members choose to battle a bag in group class.

For Rajnic, the class was everything she had been looking for. Not only did she lose 25 pounds and inches from her waist, but she also gained the confidence to participate in a marathon -- something she never thought she'd do. She credits it to boxing. "It creates agility where I don't have the agility or the mobility [because] of a missing limb," she said. She added that the program has helped her develop "a fitness component to my body that I've never been able to achieve before."

Traditionally thought of as a combat sport between two people and four fists, boxing is now seen as an excellent form of exercise. Although physical fitness experts have touted boxing as a good way to tone up and bust fat, some people may shy away because of a fear of injury. But injuries can be avoided by working with experienced instructors on proper form, all while building muscle tone and improving cardiovascular endurance, said Pagan. "When your form is the way it should be, it helps you execute [your moves] and your exercises are more effective," he stressed.

Although the amateur athletes at LA Boxing may not be in the same league as Muhammad Ali and Mike Tyson, they're still burning calories and staying healthy. Dr. David Johnson, an orthopedic surgeon in the sports medicine division of the Washington Hospital Center in Washington and a former Olympic swimmer, said boxing is a perfect way to combine cardio with strength training. "A lot of my women patients have taken up boxing," he said. "They like the idea of losing weight and getting in better form."

View an audio slideshow of Rajnic and others working out »

Johnson said a group boxing class is a good idea. "They teach you the basics: how to hold your hands, your arms," he said.

He added that he sees a lot of hand and arm injuries in patients who box. "They don't know where to hold their thumbs, how to hit a bag," he said. "Any class that can teach people how to safely box can't hurt."

LA Boxing and other gyms across the country say an hour workout can burn hundreds of calories -- even up to 1,000. If that sounds like a lot, Johnson noted it takes plenty of effort and stamina to pound and kick a bag for an hour. "Just keeping your arms up for that length of time takes real muscle strength," he said.

Pagan said his members not only claim they've lost pounds, but also say they've improved their strength. "Our members, especially our women, say it makes them feel empowered," he said. "It's not a bad skill to kick some butt."

Rajnic couldn't agree more. "I've become more toned," she said enthusiastically. "My body is more shapely, and I have an overall sense of euphoria after one hour of working out, which is hard to come by in a lot of classes."

All About Amateur Boxing • Aerobics and Cardio Training