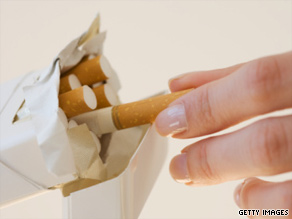 "Smoking is the leading cause of preventable disease, disability and death," an FDA official said.

The FDA said Chantix and Zyban will carry the warnings to alert consumers to the risks of depression and suicidal thoughts when using the drugs.

The drugs also have been reported to cause changes in behavior, hostility and agitation in users, whether users had a history of psychiatric illness or not. In many cases, side effects started shortly after use began and ended when the medication was stopped. The FDA does not know what is causing the changes and said people taking these products should be monitored by their doctor.

"The risk of serious adverse events while taking these products must be weighed against the significant health benefits of quitting smoking," said Dr. Janet Woodcock, director of the FDA's Center for Drug Evaluation and Research. "Smoking is the leading cause of preventable disease, disability and death in the United States, and we know these products are effective aids in helping people quit."

The agency also is requiring Pfizer Inc., which makes Chantix, and GlaxoSmithKline, maker of Zyban, to conduct a study looking at how often these serious symptoms occur.

Pfizer says it updated its label in 2007 to include information of neuropsychiatric symptoms and has revised the label again to reflect Wednesday's warning.

"The labeling update underscores the important role of health care providers in treating smokers attempting to quit and provides specific information about Chantix and instructions that physicians and patients should follow closely," said Dr. Briggs W. Morrison, senior vice president of the primary care development group at Pfizer. "Quitting smoking is one of the best things people can do for their health, but the quitting process is both difficult and complex."

Zyban contains the same active ingredient as the antidepressant Wellbutrin and already carried a box warning about the increased risk of suicidal thinking and behavior.

Neither Chantix nor Zyban contains nicotine, and the FDA said some symptoms could be the result of nicotine withdrawal. Still, the agency said, people using these drugs experienced some of these symptoms while they were still smoking.

In a review of side effects in patients using the nicotine patch, the agency said it didn't find a clear link between those products and suicidal events.

All About Smoking • Food and Drug Administration