(CNN) -- It's been nine years since Kim and Curtis Christiansen were married. Since then they've had their ups and downs, but they've remained close. But when Curtis began snoring about three years ago, Kim began sleeping on the couch. 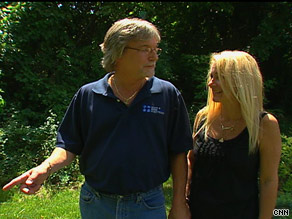 After his snoring drove his wife, Kim, to sleep on the couch, Curtis Christiansen saw a sleep specialist.

"His snoring was so loud. At first I would just elbow him to wake him up," she said, "But then I became concerned. He would just (she gasps for breath). It would take his breath away."

At first Curtis Christiansen figured he was tired, a little run down from his job. He thought the snoring was just a symptom of his exhaustion. But when he started nodding off while waiting at a traffic light, he knew something was wrong.

"I became more aware of this choking and waking-up feeling," he said.

According to the National Sleep Foundation, more than 18 million American adults have sleep apnea, and many of them don't know it. Some people think their snoring is just a side effect of a busy lifestyle.

Watch more on the difference between sleep apnea and snoring »

In some cases, that's true. But the foundation says it's trying to get more people to realize how important it is to know the difference between occasional snoring and apnea.

Studies have shown that sleep apnea has some serious side effects.

A disorder in which breathing is briefly and repeatedly interrupted during sleep, apnea occurs when the muscles in the back of the throat fail to keep the airway open, despite efforts to breathe. That can cause broken sleep patterns and low blood oxygen levels. Doctors say these side effects can lead to hypertension, heart disease, and mood and memory problems.

In a recent study at the University of Maryland Medical Center, researchers found that sleep apnea can cause a rise in depression and that sleep-related breathing disorders can also worsen nightmares and post-traumatic stress disorder.

And because sufferers are usually sleepy during the day, apnea can increase the risk of automobile crashes. There's no question it can be life-threatening, doctors say.

So how do you know whether your snoring is something more serious?

When snoring starts to affect your daily habits, you should see a doctor, said Dr. Thomas LoRusso, director of the Northern Virginia Sleep Diagnostic Centers.

"A bed partner may notice that the patient stops breathing and snores loudly, " LoRusso said. "And the daytime symptoms are sleepiness, poor concentration, problems waking up in the morning."

LoRusso says a good way to check your sleep habits is to note your levels of fatigue during the day and jot down other symptoms you might be having. And if you have a bed partner, ask whether he or she has noticed any "choking or gasping while you snore," he said. "The person you sleep with, many times, knows your snoring better than you."

LoRusso agrees. "Cut out the alcohol," he said. "It can make the upper airway muscles to relax."

These seemingly small changes can have dramatic results.

"In some cases, changing these factors can eliminate sleep apnea from some patients," LoRusso said.

For Curtis Christiansen, it wasn't that easy. Not only was he thin and a non-smoker, he suffered from high blood pressure and high cholesterol and, because of a previous health issue, had only one kidney. He needed help immediately.

His doctor recommended a device called a CPAP, or continuous positive airway pressure device. It's a mask or nose piece that blows air into the airway to keep it open while a patient sleeps. Although surgery is an option for those who have problems even with the CPAP, Christiansen wasn't one of them.

Since his diagnosis, Christiansen has gotten his blood pressure under control.

When he started wearing the CPAP, he confesses, he'd leave it behind when he went out of town.

"But I found I wasn't getting a good night's sleep, so now I take the CPAP along," he said with a smile, "and I have a restful vacation with my wife."