LONDON, England (CNN) -- A disabled punk band has launched a campaign to fight for the rights of disabled people to be able to party late. 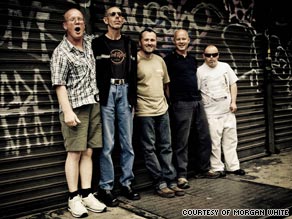 Heavy Load are a UK-based punk band with three out of five members who are disabled.

"Heavy Load," describe themselves as an "anarcho-garage-punk" band and are made up of five musicians, one of whom has Downs Syndrome and two who have unspecified learning disabilities.

Their campaign, "Stay Up Late," encourages carers to support disabled people who want to stay out past 10pm.

Heavy Load's manager and bass guitarist, Paul Richards, 39, told CNN: "The Stay Up Late" campaign is to raise awareness, and tackle the issue where disabled gig-goers end up going home at 9pm, therefore missing most of the evening, because their support workers finish their shifts at 10pm.

"We started the campaign because we'd be playing a gig and something strange happens at 9pm when people would start to go home. We were also frustrated with asking to go on earlier in the evening so that our fans would still be there. It's not very punk to go on at 8.30pm," he added.

"Stay up Late" has received widespread support from disabled people and the UK government, Richards said. Even carers who may be required to work later if the campaign is successful have offered their support.

"So far, we've only had one or two support workers say that they don't think they should be required to work unsociable hours," Richards said.

The group has also partnered with the UK's leading learning disabilities charity Mencap, who they say have really helped to relay their message to a wider audience.

Mencap and Heavy Load teamed up last week where the band headlined a concert in London for people with learning disabilities, giving them an opportunity to be involved in running a club night.

See images from the concert »

They concert was held in conjunction with London venue Proud Camden, and around 400 people attended the event which finished at 1am.

Everyone at the event, from the door girl, to bar staff and cloakroom attendants, were people with learning disabilities, venue owner Alex Proud told CNN.

He said: "At these nights there is a lack of inhibitions. They tend to let their hair down and really know how to party; it's a hell of a lot of fun for all involved. Proud is eager to put on events that include people with a learning disability and to make the public more aware of this often overlooked group.

"Young people with learning disabilities want to go out, but they are not catered for in the entertainment industry," he added.

Heavy Load have been together for 13 years since meeting at the Southdown housing in England, a non-profit assisted-living community for people with learning disabilities.

Since then the band has gained many disabled and non-disabled fans and a successful documentary, "Heavy Load," has been made about their lives.

Now they are looking forward to setting up the "Stay Up Late" campaign around the world.

Richards said: "When we visited New York last year we were surprised to find that it's an issue for people with learning disabilities to get out much at all -- so there is definitely a need there.

"We've also been asked to go to Russia, Serbia, other parts of the U.S., Scotland and Czech Republic to play and promote the campaign -- which we'd love to do, but money's tight, " he added.

However, Richards insists the campaign is not about partying late every night.

"We don't insist on people staying up late against their will -- just having the choice to do what they want to do!"