(CNN) -- From supermarkets to the office supply store, it's hard to miss those tiny bottles of 5-hour Energy. 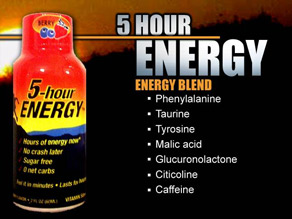 The makers of 5-Hour Energy call it a "no-nonsense drink."

"It would be easier for me to tell you where we didn't sell them in the U.S. than list all the places we do," said Carl Sperber, spokesman for Living Essentials, the Detroit, Michigan-based manufacturer of 5-hour Energy shot.

The small, shot-glass size bottles promise to provide energy and alertness without jitters to fatigued Americans. Unlike other popular energy drinks that market to college students, 5-Hour Energy's audience is multitasking, working professionals. The market demand has skyrocketed since the product hit store shelves in 2004. The company expects to move more than 350 million shots this year, Sperber said, up from 174 million in 2008.

"This is a no-nonsense drink," Sperber said. "It is not a fashion statement. It doesn't have a cool name; it is just a simple grab-and-go product to help busy adults when they can't afford a letdown."

Each 2-ounce bottle contains zero grams of sugar, 4 calories and about the same amount of caffeine as a small coffee. It also contains about a dozen ingredients that are broken down into B vitamins (B3, B6, B9, B12) and what the manufacturer lists as an "energy blend."

"The B vitamins are given at extraordinarily high levels, and people need to know they are not some magic potion that's going to immediately raise your energy level," said Dr. Brent Bauer, Mayo Clinic director of complementary and integrative medicine. "There is no data that show that."

The overall health impact of the shots' energy blend is a little fuzzy, according to some experts, because little data has been collected about the effectiveness or safety of the natural compounds. The blend contains: citicoline, tyrosine, phenylalanine, taurine, malic acid, glucuronolactone and caffeine. Phenylalanine, taurine, tyrosine are all amino acids our bodies naturally produce. Malic acid is a natural chemical substance found in food. Glucuronolactone is a byproduct of glucose produced in the liver. Citicoline is a natural compound that produces a chemical in the brain.

"These energy shots have over a dozen ingredients all together, and consumers are ingesting them at very high doses but there is no research of how the ingredients react all together," Bauer said.

"It's plausible if you put these 12 things together you will get a good result but it's also possible for them to cause major interactions to medications, or have a negative impact on the liver or kidney. We just don't know at this point."

Watch Dr. Gupta talk about the the safety of 5-hour Energy »

Consumers of 5-hour Energy probably won't ever drink enough shots to reach toxic levels of the B vitamins, experts said, but side effects can occur. The maker notes on its Web site the potential "niacin flush reaction" from vitamin B3.

It would be noticeable but temporary, one expert said. "If you have too much B3 it can cause tingling in your whole body. You will turn red, flush, but it would only last for about 30 minutes," said Jim White, spokesman for the American Dietetic Association. "Research also shows high doses of vitamin B6 can cause nerve spasm, also temporary trouble with muscle coordination."

5-hour Energy's spokesman says that his company doesn't have safety data on the specific blend of ingredients in its product, but believes that side effects are "rare."

"None of our ingredients are synthetic drugs," Sperber said. 5-hour Energy also advises consumers to check with their health care provider before taking the booster.

Medical experts acknowledged that if taken modestly, the products are unlikely to have a negative impact on health.

"In moderation, it can give you energy. But the problem is people drink coffee, then take these energy shots, then down Red Bull, take Hydroxycut, and it is just too much in the body at one time," White said.

The makers of 5-hour Energy agree. "There is no law against stupidity and there is always that person out there that is going to push the envelope and consume too many of them or combine our product with others, but we can't really control that," Sperber said.

All About Vitamins and Supplements