(CNN) -- For 12 years, Georgia Dunston and Dr. Chiledum Ahaghotu have been trying to figure out why African-American men develop prostate cancer at an earlier age and are twice as likely to die from it than any other group in the United States. 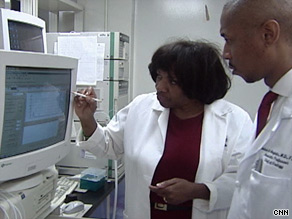 Doctors are looking to genes for answers as to why prostate cancer is so deadly among black men.

Although scientists have long suspected a genetic component, the link was never explored in depth before Dunston and Ahaghotu decided started their study.

In 1997, Dunston, Ph.D., the founding director of Howard University's National Human Genome Center, and Ahaghotu, a urologist, began the African-American Hereditary Prostate Cancer Study to study the family genes of black men with prostate cancer. By following the different generations, and tracking their health and genetic makeup, the scientists hoped to better understand why prostate cancer is so deadly in this population and whether the disease is primarily inherited or caused by environmental or lifestyle factors. Sound off: How can we close the disparity gap in healthcare for black Americans?

"We're looking for those individuals who can give us an indicator of what are the genes that are associated with that underlying cancer," said Dunston. "Because it's not a difference in the gene -- the difference is whether you're born with it or it's caused by changes that develop later in life"

Thirteen research centers across the country, including one at Howard University in Washington, recruited black men and their relatives -- siblings, fathers, uncles, grandfathers, great-grandfathers from a total of 77 families -- and recorded their medical history. With support from the National Institutes of Health and the National Human Genome Research Institute, AAHPC researchers have been sifting through family health records and looking at the participants' genetic makeup, through blood samples, to see whether there are common genetic mutations or markers that are linked to the disease.

The research has paid off, identifying a genetic mutation that may triple the risk of prostate cancer in black men who carry it. "We have identified a couple of very interesting gene markers that seem to be more prevalent in these families that have high incidences of prostate cancer, with an early onset," said Ahaghotu.

Dr. Gupta: Watch how the researcher search for clues »

"We also did a paper looking at some of the clinical characteristics of those men who presented with early onset prostate cancer, and we found that many of these individuals actually had disease that could be treated," Ahaghotu adds. "In the past, there was this belief that men of African descent tend to have more aggressive forms of cancer, have poor prognosis. But what we've found was that in those individuals who are identified at an early stage -- they actually had favorable outcomes."

There are also interesting data on how black men treat their prostate cancer, said Aghaghotu.

"It was interesting because many of the men who had the disease in their families tended to get the same kind of treatment as their siblings and relatives."

"So if an individual had a radical prostate removal, you found that many other affected members of the family also had that treatment, whereas some individuals who had radiation therapy, again their relatives tended to follow suit."

But these doctors say there is much more to do. Both Ahaghotu and Dunston know their main goal has not been reached.

"We'll continue to look for genetic markers," said Ahaghotu. "What we'd like to do is re-engage these families and do a more extended follow-up and that obviously requires resources, so we're currently in the process of trying to secure more resources to go forward with further investigation."

Continuing the research could be a huge benefit to those who suffer from the disease.

"If we can clearly identify a genetic marker, it would be very important for screening, possibly even offering treatment ... possibly even preventing the disease before it occurs."

All About Prostate Cancer • African-American Issues