(CNN) -- For years, dentists have warned patients about the decaying effects of cola and sugary, fizzy drinks on their teeth. 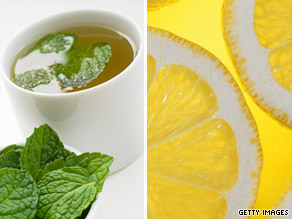 Acidic drinks that are healthier than soda caused tooth erosion in dental experiments.

Research shows that other drinks thought to be better --fruit juices, teas and energy drinks-- can also have harmful effects on teeth, turning the pearly whites to shrinking, spotted yellows marred with pockmarks.

"We all became aware of the sugar on your teeth. What most of us don't know is the acid," said Dr. Mohamed Bassiouny, a restorative dentistry professor at Temple University. "Cavities form when bacteria in the mouth mixes with sugar, leading to decay. Erosion occurs when chemicals strip the mineral off the teeth.

"The seriousness of the erosion is far more than decay," said Bassiouny. "Erosion affects all teeth at once, as you can imagine acidic fluid is running through the entire mouth."

This causes hypersensitivity, discoloration and cracks on the teeth. Serious cases require crowns or even dentures if entire teeth have disintegrated.

Research in Europe has linked that acidic beverage consumption to increasing tooth erosion. A person who has bulimia or acid reflux disease could get tooth erosion, because of stomach acids in their mouth, but the more common culprits are often beverages, Bassiouny said. Here are some of them:

Researchers at the University of Iowa's College of Dentistry found that energy drinks and sports drinks, such as Gatorade and Red Bull, eroded the enamel more than soda and fruit juices. In a 2008 study published in the journal Nutrition Research, the dentists soaked extracted human teeth in various liquids for 25 hours, and then measured the structural changes, or lesions.

"Power drinks can be quite acidic, usually because there is an addition of citric acid to those to give it tartness that is desired by some consumers," said Dr. Clark Stanford, the associate dean for research at the University of Iowa College of Dentistry. "It's important to look at the label and see if citric acid has been added."

Dentists have warned for years the perils of carbonated beverages. But don't disregard diet drinks. The lack of sugar in these products doesn't mean they don't erode the teeth, Bassiouny said. Carbonation could make the drink more acidic, he said.

A patient whom Bassiouny examined had drunk a liter of diet soda every day for the last three years. He likened her teeth to those of a methamphetamine user. The corrosive chemicals from the drug can cause extensive oral damage commonly known as "meth mouth," in which teeth decay, crack and crumble.

A study published this year in the Journal of Dentistry showed that orange juice decreased enamel hardness by 84 percent. Lemon, orange and grapefruit juice can strip away the enamel with their acidity.

"We encourage adults if they're going to have kids drink fruit juices, which is good in a way, that they consume it all at once instead of sipping on it all day long," Stanford said.

Lemon juice showed the highest erosion, according to Bassiouny's study, which was published in the May-June issue of General Dentistry.

The drink sometimes considered a super food because of its antioxidant content can cause tooth erosion, but not as much as citric juices, soda and energy and sports drinks.

"Tea is controversial," Stanford said. "Certain types of tea can actually stabilize the amount of tooth loss or demineralization of the surface. Others, if they have a low pH, can cause natural erosion of the tooth surface."

This doesn't mean people should avoid tea or citric juices, Bassiouny said. The key is to practice moderation. He suggested keeping acidic beverages to fewer than five servings a week and avoiding sugary canned teas.

Dentists acknowledge that the methodology of the erosion studies have flaws. The teeth were soaked in beverages because it's impossible to re-create the human mouth in a laboratory. And the experiments do not take into consideration the natural defense humans have against acid -- their saliva.

While the studies have limitations, this should not discount the findings, Bassiouny said. The dental studies attempt to show the accelerated effect of a person drinking common beverages. "We adopted a lab setup to simulate the number of hours that the patient has been exposed to that challenge and to magnify that," he said.