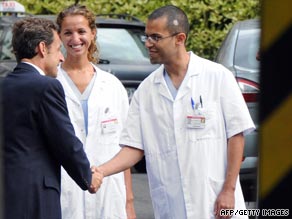 Though the hospital which treated Sarkozy said tests had detected nothing abnormal, officials said the president's fainting had been caused by a nerve condition called vasovagal syncope.

Syncope (pronounced "sin-ko-pea") is the brief loss of consciousness or fainting caused by a temporary decrease in blood flow to the brain.

It is a common condition that affects as many as half of all people at least once in their life. Three percent of people develop it more frequently.

Syncope may be associated with a sudden fall in blood pressure, a decrease in heart rate or changes in blood volume or distribution.

According to some experts, syncope is often the result of an underlying medical condition that could be related to the heart, nervous system or blood flow to the brain. It is also associated with anxiety, fear, pain or hunger and often happens when a person goes from a sitting position to a standing one.

There are several types of syncope. The most common one is vasovagal syncope, which occurs when the blood pressure drops suddenly, reducing blood flow to the brain.

When a person stands up, gravity causes blood to settle in the lower part of the body. In most people, the heart and nervous system will react and give out the correct signals to maintain blood flowing everywhere else in the body. But in some cases, the system does not send out the right signals, leading to a lack of blood flowing to the brain.

What happens when the condition strikes?

Symptoms include dizziness, nausea, sweating, falling and, ultimately, fainting. After "blacking out," the person usually regains consciousness within minutes, but may experience a period of confusion or feeling weak for up to 24 hours.

In 2002, former U.S. President George W. Bush had a fall at the White House after he choked on a pretzel. The pretzel stuck in his throat and caused the vagus nerve to send a signal to his heart. This slowed it down and reduced blood flow so much he passed out.

How is syncope treated?

Depending on the underlying cause of syncope, treatment is aimed at preventing a syncope recurrence. Treatment may include medication; wearing garments to improve circulation; changing one's diet; taking precautions when changing positions from sitting to standing and in rare cases, implanting a pacemaker.

With appropriate treatment, syncope can be resolved in most patients.