Cooling is catching on for cardiac arrest patients

This report, originally published in August on CNNHealth.com, examines effective new lifesaving methods and how they're practiced by a surprisingly small number of U.S. medical professionals.

PHILADELPHIA, Pennsylvania (CNN) -- Seated on a jetliner, Dr. Mary Gallagher and her husband, Don Dietrich, were about to take off for an anniversary vacation in Puerto Rico. But a glance at her husband of five years set off an alarm -- he was gasping for breath. Gallagher, an anesthesiologist, knew the signs: Dietrich was in cardiac arrest. 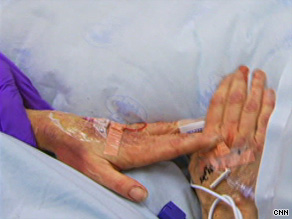 Therapeutic hypothermia patients receive a chilled saline solution and are put under a cooling pad or blanket.

Gallagher ran to tell the pilot; someone called 911 from a cell phone; another passenger started CPR. Paramedics appeared and then Gallagher made a crucial decision: Even though protocol called for Dietrich to be taken to the nearest hospital, three miles away, she insisted he go twice as far, to the University of Pennsylvania Hospital and its Center for Resuscitation Science.

By the time Dietrich hit the emergency room, he had a weak pulse. At most hospitals, standard treatment is to sit tight and hope for the best. But at UPenn, doctors hooked Dietrich to an intravenous line of chilled saline solution, dropping his body temperature to a cool 91 degrees.

More than 90 percent of people who suffer cardiac arrest, as Dietrich did, end up dying. For more than a decade, there has been evidence that cooling a patient's body -- or therapeutic hypothermia -- improves those odds. No one quite knows why, but it's thought that the cold reduces the body's need for oxygen and slows the deadly chemical cascade that sets in when oxygen isn't circulating because the heart stopped beating.

Yet, as one 2007 paper put it, "implementation of hypothermia is lousy." In 2006, researchers at the University of Chicago found that just 34 percent of critical care physicians, and just 16 percent of emergency physicians, had ever attempted to use hypothermia to treat cardiac arrest. Makers of cooling equipment say fewer than 300 hospitals, out of more than 6,000 nationwide, have the necessary equipment.

Cost is often cited as a reason for this reluctance, but a study published Tuesday by UPenn researchers in the journal Circulation finds that cooling is more cost effective than many established medical therapies. Standard equipment -- cooling pads, and a box that carefully calibrates the temperature of the cooling solution -- cost about $25,000. That might sound like a lot, but Dr. Raina Merchant, the lead author of the study, puts it in perspective. "If you cool even one patient and avoid complications, you save more than the cost of dozens of boxes. It's cheaper to cool than not to cool," she says. According to Merchant, beyond the initial outlay it only costs about $1,000 to cool a single patient.

The Circulation paper uses an esoteric measure called QALYs (pronounced quallies) that stands for quality life years. The UPenn team reported that the "incremental cost-effectiveness ratio" of therapeutic hypothermia for cardiac arrest is $47,168 for every QALY. While it may take a biostatistician to interpret that language, generally speaking anything less than $100,000 per QALY is considered cost effective. The calculation for kidney dialysis is $55,000; for putting automated defibrillators in public places, it's $44,000.

Putting a price tag on lifesaving medical treatments makes people uneasy, but there's also strong medical evidence to support therapeutic hypothermia. The best-known study, published in the New England Journal of Medicine in 2002 by European researchers, found that 55 percent of patients who were cooled had a good outcome, compared with 39 percent of those who weren't cooled.

Translating medical research into practice is never easy, but Dr. Ben Abella, a co-author on the Circulation paper and the clinical research director of the Center for Resuscitation Science, says that hypothermia is an especially hard pill for some to swallow. "It's a paradigm shift. We're using this for people whose eyes are yellow, they're not moving, and you're telling doctors to cool these people for 24 hours, warm them up for a day, then take them to the cath lab. You're doing all these things for people who look dead, sound dead and act dead. It's asking a lot," he says.

But the tide may be turning. A handful of cities, as well as the state of Arizona, now emphasize the technique by requiring that cardiac-arrest patients be taken only to hospitals that follow a certain protocol that includes hypothermia. The latest location to come on board is New York City.

Gallagher says it was only when she heard a voice on the plane's intercom calling out "Is there a doctor on board?" did reality smack her in the face. "*&%*! That's me!" she thought. She says that without her insider's knowledge, her husband would have gone to one of the many hospitals that don't use cooling therapy, and the odds would have been stacked even higher against him.

After 24 hours, doctors slowly warmed Dietrich back to a normal temperature. They waited, and within a week he was awake and talking. He emerged unscathed from his ordeal, save for a few days missing from his memory. What he does remember is chatting with the nurses after waking up in the UPenn intensive care unit. He says, "The nurses told me, 'If you had gone to [the other hospital], you would have wound up here three hours later -- dead.'"

All About New York City