(CNN) -- Michael Phelps, who scored his fifth gold medal at the world championships in Rome, Italy, last weekend, has a body that frequently propels him to world record speeds in the pool. 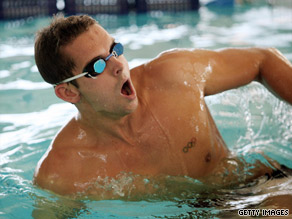 Eamon Sullivan, who broke two world records for the 100-meter freestyle in 2008, was considered in the study.

To move fast, athletes such as Phelps need the right balance of vertical and horizontal -- that is, a lot of height and weight, but not too much weight to hold them back. Researchers at Duke University have found that winning Olympic athletes today are mostly taller and heavier than their predecessors, and that this pattern has been consistent for 100 years.

That goes along with the idea that, generally, bigger animals can move faster than smaller animals.

It's not that winning athletes are getting either fatter or taller, but that the overall size of the average winner today has increased proportionally compared with winners in the past, and is expected to continue growing in the future, said Adrian Bejan, professor of mechanical engineering and materials science at Duke University. The study is in the newest issue of the Journal of Experimental Biology.

Bejan and colleagues used mathematical formulas that govern speed and motion to analyze how the bodies of Olympic athletes in different time periods compared with each other. They say the pattern is consistent with what they call constructal theory, the idea that natural systems evolve to promote easier "flow" -- for example, of air through lungs, or of water through river basins.

Generally, track athletes need more height and more muscle mass for propulsion, said Dr. R. Amadeus Mason, sports medicine physician at Emory University, who was not involved in the study. For swimming, world record-holder Michael Phelps, at 6-foot-4, 195 pounds as of the Summer Games last year, has the "ideal" body, allowing him to stroke efficiently without being too heavy, Mason said.

Bejan and colleagues suggest that the trend of Olympic winners getting taller and heavier as a population -- not on the individual level -- is separate from the trend of growth of height and weight in the population generally.

"The increases in the size in the winning athletes belong to a different phenomenon, the phenomenon of the pursuit of speed," Bejan said.

But some experts who were not involved in the study say other factors are at play.

It is difficult to generalize about the growth of winning athletes compared with the entire population, Mason said.

Rather, it is more likely that they are part of the larger trend of human bodies growing in general, Mason said. This recognized phenomenon is not well understood, but it may reflect that proportion of the population is getting better nutrition, or that certain additives in foods contribute to growth, he said.

The strong incentives for people to aspire to be professional athletes, such as fame and money, may also have something to do with what the Duke study observed, said Joe Patterson, professor of astronomy at Columbia University, who has analyzed speed records at the Olympics and was not involved in Bejan's study. The benefits of being an Olympic champion have increased over time, meaning more people attempt to compete, so there are more people with body sizes that promote speed in that group, he said.

He also pointed to technological changes in training and nutrition that may have helped athletes come bigger generally. Illegal drugs may also have something to do with it, Patterson said. Low-friction swimsuits and better-designed pools may have also given swimmers extra speed.

In the data, researchers noted, for example, that Duke Kahanamoku, who had world records for the 100-meter freestyle in 1912 and 1918, weighed 185 pounds and stood 6 feet, 2 inches. In 2008, Alain Bernard broke a record for the same race, weighing 190 pounds and standing about 6 feet, 5 inches.

But not everyone conforms to the pattern of increased height and weight -- at about 172 pounds, swimmer Eamon Sullivan weighed less than both Kahanamoku and Bernard, and also broke records for the same contest in 2008.

There appears to be no limit to the growth of the human body in the near future, Bejan said. It follows that there is no foreseen limit to human speed, because larger size is required to go faster, Bejan said.

But Mason disagrees -- he doesn't think 100 years from now the winning athletes will show the same addition of height and weight as today's winners show compared to their counterparts in the early 1900s.

"At some point, you're going to get too tall to be able to move efficiently, too heavy to move quickly," Mason said.

Bejan's group also used their findings to predict running speeds during the Roman Empire. They found that, in antiquity, body weights were about 70 percent what they are today. If the winner of the 100-meter dash wins in 13 seconds today, the winner 2000 years ago would have taken about 14 seconds, the researchers said.