LONDON, England (CNN) -- Britons including Prime Minister Gordon Brown have leapt to the defense of their creaking healthcare service after President Barack Obama's plans for a similar system in the United States were branded "evil" by Republicans. 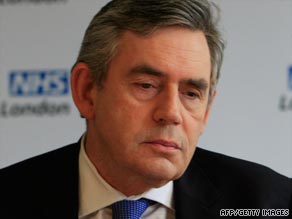 British Prime Minister Gordon Brown issued a heartfelt message of support for the NHS via Twitter.

Tens of thousands of people have joined a Twitter group expressing pride in the UK's National Health Service (NHS), which offers free taxpayer-funded medical care to all British residents, while leading politicians have spoken out in support.

Republican former vice-presidential candidate Sarah Palin earlier this week condemned Obama's plans to introduce a public heath insurance scheme as an "evil" move that would result in "death panels" deciding who would live or die.

Her criticism has been echoed by fellow Republicans in direct attacks on Britain's NHS. In an article, Former House of Representatives Speaker Newt Gingrich said British healthcare was run by "Orwellian" bureaucrats who put a price tag on life.

Sound off: What do you think of the British healthcare model?

The comments caused a storm of protest in the United Kingdom, with Prime Minister Brown wading into the argument via micro-blogging site Twitter, where a conversation chain, "#welovetheNHS", is generating huge online traffic.

A posting on the 10 Downing Street Twitter site on Wednesday read: "PM: NHS often makes the difference between pain and comfort, despair and hope, life and death. Thanks for always being there."

The message was followed by another, from Brown's wife Sarah, adding: "#welovetheNHS -- more than words can say."

Professor Stephen Hawking, author of "A Brief History of Time", also spoke out in favor of the British system, telling the Guardian newspaper that he owes his life to NHS treatment for the neuro-muscular dystrophy he has suffered from for 40 years.

"I wouldn't be here today if it were not for the NHS," he said. "I have received a large amount of high-quality treatment without which I would not have survived."

Despite the support, the 51-year-old NHS is regularly the target of criticism at home, with opposition politicians accusing Brown's government of mismanagement resulting in long waiting lists and a "lottery" in deciding who gets life-saving drugs and surgery.

Nevertheless, opposition Conservative Party leader David Cameron also added his voice to the defense campaign with a posting on his party's Web site.

" Millions of people are grateful for the care they have received from the NHS -- including my own family.

"One of the wonderful things about living in this country is that the moment you're injured or fall ill -- no matter who you are, where you are from, or how much money you've got -- you know that the NHS will look after you."

His statement followed comments from one of his own party members backing the Republican criticism of the NHS. Dan Hannan, a Conservative member of the European Parliament reportedly said in an interview that "he wouldn't wish it on anyone."