LONDON, England (CNN) -- Cardiologist Steven Greenberg keeps tabs on his patients around the clock, but he doesn't have to lose much sleep to do so. 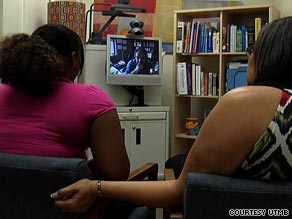 Virtual care: A teen, with her mother, gets counseling from a psychiatrist via telemedicine.

Greenberg is able to monitor his patients daily, thanks to a device billed as the world's first wireless pacemaker.

The pacemaker communicates with a monitoring system in the patient's home, vital information is then gathered and automatically relayed to Greenberg's office.

Greenberg became the first doctor to implant the pacemaker in an operation which happened in the U.S. last month.

Since then he has inserted around a dozen of the pacemakers in his patients and says the treatment could soon become standard.

He envisions even more sophisticated devices that allow doctors to monitor other key vital signs like blood pressure and glucose levels to be developed down the line.

Besides daily updates, the device alerts him if it detects any irregular heartbeats which the pacemaker isn't programmed to handle, thereby helping him stay a step ahead of potentially life-threatening problems.

"If a patient's asleep and you see this abnormal rate, you can bring them in, put them on a blood thinner and prevent them from having a stroke," said Greenberg, a heart specialist at the Arrhythmia and Pacemaker Center at St. Francis Hospital in Roslyn, NY.

The pacemaker, manufactured by St. Jude Medical, is the latest device to showcase the growing trend of using communications technology to deliver health care services.

Greenberg told CNN the wireless device not only provides safety but convenience for patients, who are able to rest easier and can make fewer trips to the doctor's office.

Increasingly new technologies are making it possible for doctors to keep tabs on their patients from afar and around the clock.

At the University of Texas Medical Branch (UTMB) at Galveston, Texas, doctors do everything from running mental health screens to providing post-surgery follow-ups via video terminal.

The academic medical center's telemedicine program handles roughly 60,000 patient encounters each year and has delivered care to a swathe of patients, from prison inmates to researchers in Antarctica and passengers on cruise ships.

As Dr. Ben Raimer of UTMB sees it, remote medicine is another tool for doctors to expand the reach of their stethoscope. It's being used to provide care to under served communities worldwide, particularly in areas like the developing world.

Distance treatment doesn't only help broaden access of care, it also enhances care and lowers costs, said Raimer. "It expedites getting the patient to the right place and to the right level of care," he said.

The virtual doctor has been made possible by the spread of high-speed Internet access and wireless technology.

"Devices are getting smaller, and it's an awful lot easier to connect everything together," said Jim Briggs, director of the Telemedicine and E-health Information Service run by the University of Portsmouth in the UK.

Dr. Alexander Vo, executive director of the UTMB Center for Telehealth Research and Policy, expects virtual care to become even more widespread in the future.

With health care systems around the world in crisis, now is the time for this technology to really take off, he said.

"All of this technology is being developed to provide access to care. "With access we can start providing preventive care which prevents inappropriate hospitalization and can really lead to tremendous cost savings," he said.

While Wi-Fi and other new technologies will increasingly make electronic delivery of health care easier, don't expect trips to see the doctor to disappear altogether.

According to Greenberg, even though he monitors his patients from a distance, his patients still make routine office visits.

But now when they come in, he's able to provide better treatment. Since all the information from the device has been transmitted to him ahead of time, he doesn't have to gather diagnostic information in the office and can focus on his patient's needs.

"Before there would be reams of data to read when they came in, but now I can look them in the face and concentrate on them," he said.