(CNN) -- They're ready to sting, and they know where they're going. 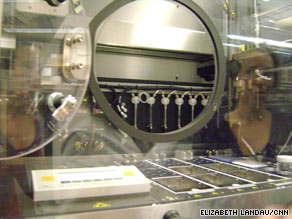 They're called "nanobees," and they're not insects -- they're tiny particles designed to destroy cancer cells by delivering a synthesized version of a toxin called melittin that is found in bees.

"Melittin, which would otherwise result in substantial destruction of your red blood cells and other normal tissues if it were delivered intravenously alone, is completely safe when it's on a nanoparticle," said Dr. Samuel Wickline, director of the Siteman Center of Cancer Nanotechnology Excellence at Washington University in St. Louis, Missouri.

Nanobees are one of the latest examples of how nanotechnology may change the way diseases are treated.

Nanotechnology encompasses a wide array of innovations that make use of structures that are 100 nanometers or smaller. That means they generally cannot be seen under a regular microscope, but are larger than individual atoms. For example, a nanobee is less than 10 times the diameter of a red blood cell, Wickline said.

Particles on the nanoscale are small enough to enter cells, but big enough to carry large doses of drugs, said Robert Langer, Institute professor at the Massachusetts Institute of Technology and a leader in the nanotech field.

"We are gradually forming a pipeline of nanotechnology-based products," said Piotr Grodzinski, director of the National Cancer Institute's Alliance for Nanotechnology in Cancer, a program that funds eight Centers of Cancer Nanotechnology Excellence in the U.S., including Wickline's and Langer's research initiatives. "These things are happening as we speak."

There have already been two approved cancer treatments on the market that make use of nanoparticles: ovarian cancer drug Doxil, approved in 1995, and breast cancer drug Abraxane, approved in 2005. Both of these involve medication bound with nanoparticles that circulate in the bloodstream for longer than conventional drugs and are expected to migrate to the tumor site, Grodzinski said. These drugs are being tested in some of the eight clinical trials associated with the NCI nano program.

Nanobees, by contrast, are engineered to travel directly to tumor cells without harming any others. They leave the healthy cells alone because the blood vessels around a tumor are like a "postal address" for the nanobees, Wickline said. These vessels express a particular protein to which a substance on the nanobees has a chemical affinity.

This principle of targeting harmful cells and leaving healthy cells intact is under development in many labs. It means efficient delivery of large concentrations of drugs, but with fewer side effects, experts say. One hundred trillion nanobees can be delivered in a single dose, and are not difficult to make, Wickline said. Also, scientists do not use real insects, so they're "not decreasing the bee population," he said.

So far nanobees have been tested only on mice, with promising results, researchers said. Wickline anticipates this therapy could become widely available in humans in about five years.

Dr. Ellen Vitetta, who also works on targeted nanotech cancer therapies at the University of Texas Southwestern Medical Center at Dallas, found the approach intriguing, but said it will be at least 10 years before something like this gets to the market. That's because what works in mice doesn't always work in humans, as she learned while developing a targeted antibody cancer treatment.

"People need to appreciate the time issues and the cost issues and just what sort of tests need to be done," she said. "But it's always fun and exciting to see a new approach, because who knows what's going to end up at the finish line."

Langer estimates that his group's nanotechnology technique for prostate cancer could be in clinical trials by the middle of next year. The method involves putting an approved cancer drug, docetaxel, in a nanoparticle that has a homing device to take it directly to the tumor.

These nanoparticles are made out of some of the same materials often used for dissolvable sutures, Langer said. In addition to having an "affinity molecule," which targets the tumor cells, these nanoparticles are coated with polyethylene glycol, which helps the particle get to its target without being "eaten" by white blood cells called macrophages.

Langer and colleagues have also been involved in a new treatment for ovarian cancer, as described in this month's issue of the journal Cancer Research. The technique has shown success in mice, and could go into clinical trials within one to two years, said lead author Daniel Anderson at MIT. The group has published work on two methods, one using DNA and one using RNA. These particles do not have special targeting antibodies on them, but are injected straight into the abdominal cavity where the cancer cells are likely floating.

Other research groups are exploring the potential of carbon nanotubes, cylindrical carbon molecules that also have applications in electronics and other areas. Researchers led by Vitetta have developed a method of heating the nanotubes with infrared light, which then "cooked" and killed cancerous lymphoma cells.

Vitetta said she doesn't want to move this treatment forward into humans until the researchers have resolved a number of issues about its potential toxicity.

Nanoparticles are also useful in medical diagnosis, researchers have found. Abigail Lytton-Jean, a postdoctoral fellow in Langer's lab, worked at Northwestern University on showing that gold nanoparticles can help detect the presence of DNA. When the nanoparticles are coated with a DNA sequence, the solution changes color in the presence of the corresponding DNA. One possible application of this would be anthrax detection, she said.

While a lot of new research is ongoing with nano-sized materials, the particles themselves are not new, and therefore should not cause any more safety concerns than other materials used in medicine, experts say.

"There are going to be nanomaterials that are toxic for sure, but I definitely do not think that because something is nano there's any more reason to have alarm," Lytton-Jean said.

Many of the NCI-sponsored nano centers, located at universities across the country, have spun off small companies, Grodzinski said. Kerios, which will make the nanobees, and BIND, which will work on Langer's group's prostate cancer therapy, are two of the 25 companies that have arisen from the research.

The pharmaceutical giants, meanwhile, are watching what comes out of them, he said.

"They probably will acquire some of these companies," he said.