'Littlest refusenik' on Kennedy: 'He saved my life' 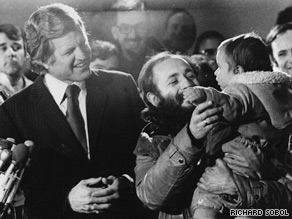 Sen. Kennedy (left) appealed to Leonid Brezhnev to allow the Katzes (Boris with Jessica) to leave the USSR.

BOSTON, Massachusetts (CNN) -- She was called "the littlest refusenik," one of the many Soviet Jews denied permission to leave the Soviet Union because her father had been exposed to government secrets.

But the case of Jessica Katz was special because she was a baby born with a nutritional deficiency that stopped her from growing. She was a tiny baby dying in a Moscow hospital, getting weaker by the day.

It was U.S. Sen. Ted Kennedy who, her parents say, eventually saved her life.

Jessica was born in Moscow in 1977 with malabsorption syndrome, which prevented her from digesting food or milk properly. All she needed was baby formula, but it wasn't available in the Soviet Union.

The Soviet doctors couldn't save her. Jessica's parents, Boris and Natalya, were desperate.

Jessica's grandmother had immigrated to Boston, Massachusetts, with two of her sons and was campaigning to get her baby granddaughter out of the Soviet Union.

At first she helped urge American tourists to take baby formula to Moscow for the Katz family, and for a little while, it worked. It seemed to bring Jessica back from the brink.

Watch more of the story of "the littlest refusenik" »

But it wasn't enough. The Katz family knew they needed a permanent solution -- access to doctors in the West.

Eventually, the grandmother's campaign reached Kennedy's office, and the senator decided to step in. In September 1978, Kennedy traveled to Moscow for a meeting with Soviet leader Leonid Brezhnev to urge him to let the Katz family -- or at the very least, Jessica -- leave the country immediately.

"If not for his intervention, I would have been arrested very soon [afterward] and it would have been too late for him to intervene," said Katz, recalling the fate of many of his Jewish friends. "So he saved Jessica, he saved me, he saved the rest our family."

The first the Katzes knew of it was late one night when they got a mysterious phone call. The caller invited Boris Katz to a midnight meeting with an unnamed guest -- and in Soviet Russia, Katz didn't dare ask who it was.

"You know in the Soviet Union not to ask too many questions over the phone," he said.

Katz arrived at the meeting and, much to his shock, in walked Kennedy.

"A bunch of KGB men came with him into the room and he just turned around and told the KGB men, 'Go away,'" Katz recalled. "This was clearly the first [time] ever I witnessed something like this. Here the all-powerful KGB men wanted to be at the meeting and the senator just told them to go away, and they looked at each other and just left. And that was, again, a powerful scene."

Kennedy spoke to other refuseniks already gathered in the room before pulling Katz aside.

"He said that earlier he had a meeting in the Kremlin with the Soviet leaders and that he specifically asked to allow us to leave the country for medical reasons," Katz said. "He said that they said yes."

At first, Katz said, he didn't believe him, sure that the Soviet authorities would find a way to scupper the plans. Katz went home and told his wife, who also didn't believe it, he said.

The next morning, a friend called Katz to say he heard Kennedy on the Voice of America radio network listing the names of people leaving the Soviet Union. The Katz family was on the list, the friend said.

Despite the report, however, the Soviet authorities denied it, Katz recalls.

"'We are telling you that this is not the case,'" he remembers them saying. "But this was just part of the game that they played."

About three weeks later, with no fanfare, a card arrived in the mail telling the Katz family to pick up their visa. They now had their ticket out of the country.

The exit wasn't straightforward -- the Katzes' second daughter, Gabriella, was born two days before they were due to leave, so they postponed their exit by five days. And they had to stop over in Vienna, Austria, where they were met by a Kennedy aide for the final leg of their trip.

On landing in Boston, Kennedy was the first person they met. They gave each other a big hug, Katz said.

"Jessica certainly would not have made it if not for his contribution, if not for him taking on the case, getting interested in the case, patiently talking to the Soviet authorities," Katz told CNN. "It was lucky for us. It saved the baby's life and created new life for Natalya and me and our children."

Kennedy's help for the family didn't end there. He helped Boris Katz, who had worked with computers, find a job at a computer software company. Today, Katz works at the renowned Massachusetts Institute of Technology, where he is the principal research scientist at the Computer Science and Artificial Intelligence Laboratory.

Today, little Jessica Katz is 31 years old. She got engaged last year, on the same weekend Kennedy's cancer diagnosis was announced to the public.

Inspired by Kennedy's life of public service, Jessica Katz works at finding housing for the homeless in New York City. She says she has no choice but to look after those less fortunate than she is, because Kennedy proved to her how much it means, and that it can work.

Jessica Katz lacks the cynicism about the government that many others in her generation may have. Kennedy, she said, proved that some politicians have a desire to accomplish good things and fight injustice.

"He saved my life. He could have spent his time doing anything," Jessica Katz said. "He's from the fanciest, most powerful family in Massachusetts, and probably in the country, and he decided to spend his time helping out me and my family."

That has instilled in her a deep sense of public service, she said. And that may be the best thing Kennedy has left behind.

"That that would be his largest, biggest part of his legacy -- as someone who cared deeply about people, who felt, I think, very deeply people's suffering and wanted to alleviate it and wanted to help," Jessica Katz said. "And I am pretty confident that this is how he will be remembered. He was an extraordinary individual and this is how he will stay, certainly in our memories and the memories of millions of others."