University of Kansas students isolated by the flu

LAWRENCE, Kansas (CNN) -- It started with a sore throat. Then her chest was burning. 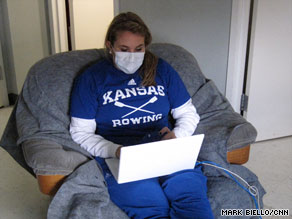 Arielle Spiridigliozzi is one of 350 students who have contracted H1N1 at the University of Kansas.

University of Kansas freshman Arielle Spiridigliozzi said she thought her symptoms were signs of allergies, or maybe even a sinus infection.

"I mean, I'd never, ever guessed that coming into freshman year I would get the friggin' swine flu," Spiridigliozzi said.

Now she accessorizes her royal blue T-shirt with a mask.

A stuffy nose, body aches, fever and coughing make up the litany of symptoms, Spiridigliozzi, 18, and her roommate, Kaitlyn Perry, 18, said they have suffered.

For more than a day, the girls have been stuck in their suite, on what they call "lockdown."

Watch more about life on "lockdown" »

University officials have asked the girls to stay in their dorm suite to limit exposure to other students. The school provides door-to-door delivery from the campus dining hall, giving the girls one less reason to have to leave their immediate four walls.

Spiridigliozzi has abided by the the university's request, worried that she could infect another. But she doesn't understand how she ended up in this situation in the first place.

"We took all the necessary precautions. Like, we really did. It wasn't like I was licking the handlebars of the bus or anything," she said. "I was hand sanitizing. I was being very careful. I don't know how this happened."

But she only has to look to her roommates for an answer, as illness has rapidly made its way through her suite.

When Perry became ill it struck her suddenly. While shopping, she came down with a fever and started feeling like she didn't have the strength to stand, she said.

Perry's flu hasn't been confirmed as an H1N1 strain, but a third roommate, the first to get sick, they said, was diagnosed with H1N1. Then a fourth roommate got sick, illustrative of a spreading flu pattern the girls said is obvious from the empty seats in classes.

The university estimates about 340 students, or 1 percent of the student body, have flu they suspect is H1N1, said Patricia Denning, medical chief of staff at Watkins Health Center. The number of cases could be higher if students were not seeking care from campus doctors and nurses, she added. She said she has not heard of any students being hospitalized because of the flu.

Vaccines are unlikely to help much this year, because supplies are not expected until late October and require about five weeks from the first inoculation -- two are required -- before they become effective.

So, to make life easier for the sick, the school's medical center has distributed what it calls a "flu kit," which includes a mask and a home-care instruction sheet, Denning said.

The tip sheet borrows from the Centers for Disease Control and Prevention's information on H1N1. It says to drink lots of fluids, eat three small meals a day and get plenty of rest, Denning said.

"And so it just goes through simple common-sense things that we all know we need to do that sometimes, when mothers and dads aren't around to remind them, this will help remind them," she said.

Spiridigliozzi and Perry will get to wander outdoors again once their fevers have dissipated for at least 24 hours without the aid of fever-reducing medications, they said. They are eager to get back to their normal lives.

Spiridigliozzi is tired of the soup and Jell-O, and Perry looks forward to playing Frisbee again.

"So boring" is how Spiridigliozzi described their isolation.

With all this free time, at least the freshmen -- on campus for only two weeks -- aren't falling too far behind in their school work.

"I got all my homework done," Perry said.

"Yeah, I've gotten all my homework done for the next two weeks, probably," added Spiridigliozzi.