(CNN) -- The federal government is reintroducing a powerful weapon in the fight against the H1N1 flu virus: Elmo. 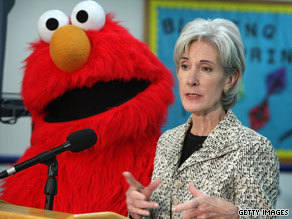 Kathleen Sebelius and Elmo spoke in May at a news conference about the H1N1 flu public service ads.

The popular Sesame Street character will be featured in a series of public service advertisements meant to encourage better hygiene among young children, the Department of Health and Human Services announced Tuesday.

In the ads, Elmo teams up with Gordon, another Sesame Street veteran, to stress the importance of basic healthy habits such as frequent hand washing, sneezing into the bend of your arm, and not touching your mouth, nose, and eyes.

The ads were initially rolled out in May, but have now been repackaged to help promote http://www.flu.gov/, the government Web site responsible for posting information regarding the H1N1 virus.

"We are thrilled to partner with Elmo, Gordon, and Sesame Workshop again to emphasize the steps kids and their parents can take to stay happy and healthy this school year," Health and Human Services Secretary Kathleen Sebelius said in a statement.

"Younger children and their parents are some of the people most at risk from the new H1N1 flu virus and with schools starting back up again and the weather starting to get colder, we need to do everything we can to get these important messages about how to prevent the spread of the flu out there."

Watch the new partnership in action »

"Elmo can be a powerful messenger in delivering simple, yet compelling messages that teach a child to wash their hands and cover their mouth this flu season," Sesame Workshop President Gary Knell said.

Sesame Workshop also played a role in the response to the H1N1 outbreak in Mexico, the statement noted. Four public service announcements were aired in May starring the Muppets of Plaza Sésamo and several Mexican celebrities.

A presidential advisory panel recently announced that the H1N1 virus, also known as swine flu, could cause up to 90,000 U.S. deaths, mainly among children and young adults, when infections likely surge upward this fall.

Seasonal flu, in contrast, typically kills about 64,000 Americans each year.

H1N1 could infect between 30 and 50 percent of the American population during the fall and winter, and lead to as many as 1.8 million hospital admissions, the President's Council of Advisors on Science and Technology reported.

The fall H1N1 resurgence may well occur as early as September, at the beginning of the school year, and infection may peak in mid-October, the report said. A vaccine against H1N1 is being tested but is not expected to be available until at least mid-October and will likely require two shots at least one week apart, health officials have noted.

Since it typically takes a couple of weeks for a person's immunity to build up after the vaccine, most Americans would not be protected until sometime in November.

All About Swine Flu • Sesame Street