(CNN) -- The love-triangles, family feuds and paternity mysteries of Brazil's telenovelas have commandeered the nation's airwaves for decades and generated a fortune for Globo -- the powerful TV network that produces many of the genre's most popular shows. 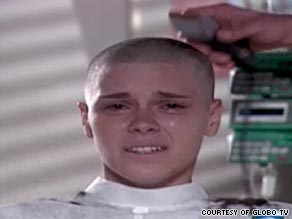 But aside from lining the pockets of television executives, evidence is emerging that the telenovelas have had a surprising impact on the fabric of Brazilian society.

From declining fertility rates and a growing proportion of divorcees, to an increasing awareness of social issues and taboo medical conditions -- it is claimed that the colorful dramas are responsible for a wave of 'social merchandising' that has helped significantly alter Brazilian values over the years.

Despite a religious culture that condemns modern family planning methods, birth rates in Brazil have decreased from 6.3 children per woman in 1963 to 2.3 in 2000. This drop is of a similar scale to that seen in China, where the government has played an extensive and controversial role in controlling population numbers.

Although such a change could be attributed to a range of factors, a new study reveals that there is a direct correlation between the availability of the Globo TV signal and low fertility rates across Brazil. This is accompanied by a similar pattern of increasing divorce rates, as well as the (albeit less remarkable) tendency for parents to name their children after popular characters.

Novelas depict the "small, healthy, urban, middle and upper-class consumerist family," says Alberto Chong, one of the study's authors. "They have been a powerful medium through which the small family has been idealized."

The changing trends certainly resonate with an analysis of 115 Globo novelas aired between 1965 and 1999. It showed that 72 percent of the main female characters had no children, and 21 percent had only one child.

The influence of TV is particularly strong in countries like Brazil. Joseph Potter, a University of Texas sociologist who has studied the relationship between fertility and television in Brazil explains in a report: "It's not a literate society, it's not a place where there are books and newspapers outside the upper 10 percent -- and television fills that space."

But as well as fashioning lifestyle choices, the novelas contribute to an increasing awareness and tolerance of difficult social issues.

Bruno Gagliasso is the star of one of the most popular novelas in Brazil. In it he plays Tarzo, a recently diagnosed schizophrenic fighting not only himself but the stigmas of mental illness.

"We're showing a disease that people ignore," he tells CNN. "And we're able to expose it to society as a whole."

Finding opportunities to insert health themes into novelas is described by some in the industry as 'social merchandising' and its effects are quantifiably real.

Globo executive Luis Erlanger says that one episode, which featured a young girl in tears as her head is shaved in preparation for chemotherapy, prompted 23,000 bone marrow donations in the month after it first aired.

Despite this, Erlanger is quick to assert that Globo's priority is always with entertainment and that social issues will never dictate plot.

However Manoel Carlos, writer of novelas since 1978, sees the inclusion of health themes and information as a personal responsibility.

"Novelas are used to sell cars and freezers," he tells CNN. "So why not sell some good information?"