ATLANTA (CNN) -- A single low dose of H1N1 vaccine may be enough to protect adults from the flu virus that has been spreading around the world, new data shows. 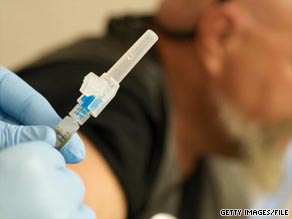 Scientists are conducting clinical trials on the H1N1 vaccine in several sites across the country.

Researchers in Australia said they tested the H1N1 vaccine in 240 people ages 18 to 64. Half were given a dose of 15 micrograms while the others were given 30 micrograms.

After 21 days, blood samples showed that most participants had an immune response of 1 to 40 titers or more, the researchers said.

Having an immune response of 1 to 40 titers is one of the criteria for the Food and Drug Administration to approve a flu vaccine, according to Dr. Raymond Strikas of the National Vaccine Program, who was not involved with the study, which was published in the New England Journal of Medicine on Thursday.

The researchers report that the 15 microgram dose of the H1N1 vaccine has mild to moderate vaccine-associated reactions, similar to what they see when the seasonal flu vaccine is given.

Watch expert discuss why one vaccine dose may be enough »

The National Institutes of Health scientists also have been conducting clinical trials on the H1N1 vaccine in several sites across the country.

"The NIH-sponsored clinical trial corroborates and confirms the exciting data by the Australians published in the New England Journal of Medicine" said Dr. Anthony Fauci, director of the National Institute of Allergy and Infectious Diseases at the NIH.

"In fact the NIH studies ... show that a single dose of unadjuvanted vaccine induces a robust immune response in healthy adults."

Fauci said their results show a strong immune response from the vaccine in eight to 10 days after a single dose of 15 micrograms, which he says is unbelievably impressive.

"That would mean we could immunize lots more people more rapidly," Dr. William Schaffner said. He is chairman of the Department of Preventive Medicine at Vanderbilt University and a member of the vaccine advisory committee to the Centers for Disease Control and Prevention.

Details on the NIH studies will be released Friday, Fauci said.

All About Swine Flu • Food and Drug Administration