PARIS, France (CNN) -- It goes without saying that France is a land that puts a certain value on kissing. 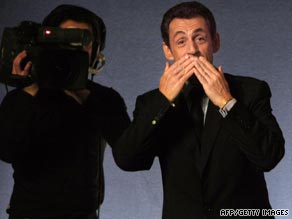 The future of French kissing? French President Nicolas Sarkozy keeps his distance with a kiss and a wave

Hands get shaken; hands get kissed. And the light cheek-to-cheek peck, known as "la bise," is a social greeting, woven in at the very youngest age.

Some observes joke that before the French could ever give up such social graces, pigs would fly.

With official publicity campaigns about the H1N1 virus, to directives on avoiding practically any close encounter of the corporal kind, the country has been put on alert as the flu season gets under way.

In schools, teachers are telling their young charges to forgo the bise, and instead capture their displays of affection in heart-shaped greetings to slip into "bise boxes."

It is restraint that is easier to sell to young students than their older brothers and sisters.

Some things, however, are finding an accepting audience: masks -- which do a pretty good job of discouraging just about any sort of kissing.

More than a quarter-million cases of swine flu have been confirmed around the world, with more than 2,800 deaths, according to the World Health Organization.

Mainland France, though, has recorded just three deaths. But the government is not taking any chances.

Watch how the French are being put on alert »

A telephone bank set up by the health ministry is receiving thousands of calls daily from people across the country asking about symptoms -- and recommendations on physical contact.

One company issued a whole array of guidelines to combat the spread of H1N1 -- including urging its employees to nix the necktie because it is the least frequently washed article of clothing.

Ties are easy, some say, because few have any idea why we wear them in the first place.

But will the flu stop tradition cold? Unlikely, said one French academic.

"The French are traditionally rebellious souls, they don't like to be told what to do," said Camille Hercot, a professor at the American University of Paris.

"So if it is really important, and if there are rules in the offices, or if they get very scared they will, but otherwise they will say pfff."