(CNN) -- Actor Patrick Swayze's achievements include several feature films such as "Dirty Dancing" and "Ghost," as well as living with advanced pancreatic cancer for longer than most patients. 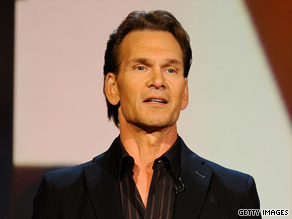 Patrick Swayze died at age 57 of pancreatic cancer. He fought the disease for nearly two years.

That Swayze, who died Monday at age 57, survived nearly two years with the condition is "quite an accomplishment," Dr. George Fisher, an oncologist who treated the star at Stanford Hospitals and Clinics, told CNN's Larry King on Tuesday.

Fisher revealed in early March 2008 that the actor was fighting pancreatic cancer. Swayze participated in a clinical trial at Stanford and took an experimental drug there, Fisher said.

Fewer than one in four patients who have the disease that has spread outside the pancreas, as Swayze did, are alive a year later, he said.

"Patients can survive two years -- even longer, even with standard treatment," Fisher said. "It's just sad that not as many do."

The American Cancer Society puts pancreatic cancer as the fourth most common cause of death from cancer in the United States. Lung, colon and breast cancer are the first three. Experts say that about 95 percent of those with pancreatic cancer die from the disease.

Doctors say early detection carries a better chance of curing the cancer, but often a patient's disease is diagnosed after it has spread. CAT scans may detect the disease early, but that does not mean everyone should have a scan with their physical, Fisher said.

"We're developing algorithms for trying to identify people at risk, and then less invasive ... tests to try to figure out who's got it and who doesn't," he said.

Despite his illness, Swayze went forward with plans to star in A&E network's "The Beast." After the actor responded well to cancer treatment, the network agreed to shoot an entire season of the show.

Working on the show while undergoing treatment was "a great idea," Fisher said on "Larry King Live."

"I had my doubts as to whether he could actually do it or not, and we had many conversations around that fact," Fisher said. Swayze understood "how difficult the treatment could be, and he understood how difficult the disease could be. But it's just like Patrick to just say he's going to do it and damn it, nobody should get in his way."

"The Beast" was canceled in June because of Swayze's illness, after doctors told him the cancer had spread to his liver.

For pancreatic cancer patients, doctors are not as concerned with what happens with the pancreas as they are with how the disease spreads elsewhere, often to the liver or abdominal cavity, Cohen said. Failure of other organs that the cancer affects may ultimately cause death.

"Particularly for a disease like pancreatic cancer, where the standard treatments help some patients but not the majority, the ability to look at new treatments that are promising in the context and controlled setting of clinical trials, I think, is really important," he said.

Dozens of drugs are in development or being tested in trials for pancreatic cancer, Cohen said. One such medication is paclitaxel, which is currently only approved for breast cancer but has shown promise experimentally in pancreatic tumors, he said.

Cohen said he and his colleagues encourage patients to continue their daily activities and live their lives normally as best they can while undergoing treatment. A chemotherapy drug commonly used in patients, called gemcitabine, does not have the harsh symptoms of nausea, vomiting and hair loss seen in other cancer drugs. But sometimes, patients are too ill from their underlying cancer to do much, he said.

"Toward the end, they can get increasing abdominal pain, nausea, loss of appetite, very low energy, sort of a wasting syndrome, and there, a lot of patients just don't feel up to do anything," he said.

All About Patrick Swayze • Pancreatic Cancer