(CNN) -- It's bad enough to be sick and miserable. But adding insult to injury for many a patient is having to hack through a veritable jungle of often-confusing paperwork to make health insurance claims. 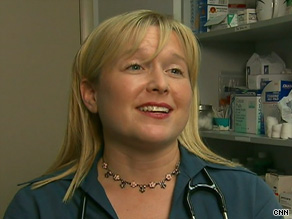 Dr. Val Jones is part of a practice in Virginia that has lowered its fees and quit taking insurance.

Consumers' frustrations with health insurance paperwork are well-known. But it's also a frustrating tangle for doctors and their staffs.

AC360° correspondent Tom Foreman has a report about one innovative practice that has decided to take on the insurance paperwork monster -- by completely avoiding it.

Dr. Val Jones joined a small practice, DocTalker Family Medicine in Vienna, Virginia, where the doctors do not even take insurance.

They charge a simple, relatively low fee for each service. That's it. The doctors at DocTalker grew tired of seeing patients struggle with baffling insurance paperwork while both their health and wealth were on the line.

This innovation has been good news for Carol "Yogi" Yogan of McClain, Virginia.

She said she broke her wrist ice skating, and her insurance company initially told her that her injury would not be covered.

After persistent effort, she eventually convinced them otherwise. The company paid. But Yogan is certain without her dogged efforts, her claim would have been forever lost in the "paperwork jungle" of the insurance trade.

Yogi Yogan has pretty much lost all faith in insurance companies. She has enough insurance to cover a catastrophic illness, but for routine care, she's now going to that nearby fee-for-service medical office where Jones works.

"It's seamless," Yogan said. She knows precisely what she is getting and what it costs.

Jones does not believe the insurance industry set out to cultivate the paperwork jungle. She thinks it just grew over time. But now that it is there, she suspects they are making so much money off of it, that there is no real incentive to clear it up.

"And people often just give up," Potter said, "and don't pursue payment when a claim has been denied or been paid inappropriately or not adequately. And the same is true with doctors and hospitals." He believes billions of dollars are at stake.

The insurance industry, while acknowledging the existence of the paperwork jungle, denies it is a trap for extra profits.

"The health insurance industry is one of the most regulated industries in America, and particularly at the state level there are all kinds of requirements of information that needs to be provided to patients in paper and through the mail," Zirkilbach said.

But he adds, insurers are just as worried as customers about the confusion that causes.

"We agree that reform is needed. In fact, that's why we've been working very hard to develop reforms to make the system more efficient," Zirkilbach said.