Below is an excerpt from CNN Chief Medical Correspondent Dr. Sanjay Gupta's new book, "Cheating Death: The Doctors and Medical Miracles that Are Saving Life Against All Odds" published by Wellness Central, an imprint of Grand Central Publishing. The following is from Chapter Two: A Heart-Stopping Moment: 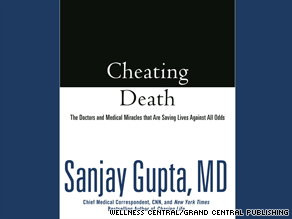 "Cheating Death: The Doctors and Medical Miracles that Are Saving Lives Against All Odds," just hit store shelves.

Mike Mertz was driving home, an hour after finishing his run as a school bus driver in Glendale, Arizona. He told me he doesn't remember why he didn't come straight home from work that day. He thinks that maybe he went for a jog. A trim fifty-nine years old, Mertz enjoyed a two- or three-mile run several days a week. Maybe he was looking for a cheaper gas station than the one on his usual route or was just trying to avoid taking his Saturn over a nasty set of new speed bumps. Whatever the reason, whatever route he wandered, it brought Mertz not to the usual entrance of his townhome complex, but the back driveway. The change in routine may have saved his life.

Corey Ash, a UPS driver, was making deliveries that Wednesday afternoon, when he heard a terrible engine noise. Thinking the sound was underneath his own hood, he pulled over. Hopping out, Ash immediately realized that it was coming from a Saturn almost directly across the street.

Hear about the medical miracles that are saving lives in the face of death, taken from Dr. Sanjay Gupta's new book "Cheating Death." All week on American Morning, 6 ET

It was an accident scene. The small silver car was piled up against a palm tree, the engine revving at top speed. The only thing keeping it in place was a stucco wall a few feet from the tree; the car was wedged between the two. Racing over, Ash could see that the driver had his eyes closed and seemed to be unconscious. The driver's foot was wedged against the accelerator. Ignoring the chance that the car might break free and crush him, Ash reached across the slumped body and turned off the ignition. He dragged Mertz out of the car and laid him on the ground. After dialing 911, Ash started CPR the way he'd learned during an Air National Guard training exercise just two months before.

As he listened to the ambulance siren, racing up the road from Glendale Fire Station 154 barely a mile away, Ash began to pump hard on Mertz' chest. Studies show that when a bystander jumps in, the chances of survival in a cardiac arrest case increase exponentially. Even though it may not seem like you are accomplishing much, simply pushing the heart and circulating the blood can make a tremendous difference. Mertz had that going for him, but he was also fortunate to have collapsed in Glendale. Paramedics there are at the forefront of a revolution in emergency care. With a few simple measures -- going against the grain of the medical establishment -- they have found that they can radically improve the odds of surviving a cardiac arrest.

The fire engine pulled up with a screech, and a brawny firefighter named Ruben Florez jumped to the curb. As fellow firefighters scrambled down, Florez thumped an urgent rhythm on Mertz' chest, two hundred compressions over two minutes, before a medic stepped in and delivered an electric shock from the paddles of a defibrillator. Win a signed copy of Dr. Gupta's book

In reality, survival from cardiac arrest outside the hospital is rare. Until very recently, Arizona was in line with the rest of the country -- only about 2 percent of the victims pulled through without long-term damage. But in 2005, cities around Arizona began doing something new. It went against the guidelines of the American Medical Association and the teaching practices of major medical schools and hospitals. This new method didn't look like the CPR that had been taught in every YMCA, firehouse, school, and church ever since the 1970s. In short, it was a radical experiment.

The experiment sprang from two lines of thinking: animal studies aimed at modifying CPR technique and a public health effort to train more people in CPR. If your heart gives out while you're walking down the street, the number-one thing that can save your life is to have a bystander who is not only trained in CPR , but willing to help. Unfortunately, such help is rare. Published studies put the rate of bystander CPR at around 20 percent. If you dig deep, the number really has nothing to do with the lack of desire. Instead, study after study shows people are apprehensive about putting their mouth on someone else's and maybe catching an infection from someone who's on the ground dying.

Now, the reluctance can be overcome. In Seattle, which has run massive training programs and public education campaigns since the 1970s, the rate of CPR assistance from bystanders is close to 50 percent. That one fact gets much of the credit for the city's high survival rate from cardiac arrest. In recent years, a driving goal of the American Heart Association has been to encourage more members of the public to jump in and help. But how? There was simply no getting around mouth-to-mouth resuscitation. Or was there?