FLAGSTAFF, Arizona (CNN) -- The Hardens were losing track of each other's conversations. It had been a long, exhausting day for both Scott, a sheriff's deputy, and Kathie, an elementary school teacher. The couple put their two young children to bed, turned on the Food Network for a few minutes, then called it a night. 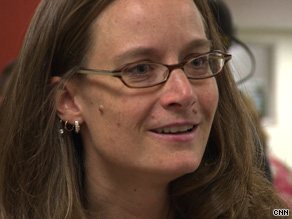 Kathie Harden is grateful that her life was saved, but her emotions are still very much on the surface

"I've always teased her about her snoring -- and she doesn't, but I've always told her that she does -- and that night it was unbelievable. It was so loud," Scott said, recalling the night less than a year ago when his 33-year-old wife died on the floor of their bedroom for 18 minutes.

"I elbowed her about two or three times, and I kicked her a couple of times. And nothing. She kept snoring," Scott said.

Could she be teasing him? Scott rubbed his knuckles across Kathie's sternum.

"People respond to a sternum rub," said Scott, a trained first responder. "When she didn't, I knew something was wrong."

Scott got out of bed and turned on the light. His wife's face was pale. Kathie wasn't snoring. She was gasping for breath.

"I got her to the floor because I knew I'd have to do CPR pretty soon," Scott said. "She took one big breath and I thought that's enough time to get me to my house phone for the 911 reversal. In case I couldn't talk, at least I could dial and throw the phone to the floor, and they could track it."

Despite Scott's training in law enforcement, the panic in his voice rose during the 911 call as Kathie stopped breathing. The minutes went by.

"Just treat it as you would if you were on the road," the dispatcher told him.

"I know. It's so different. OK? But you know what to do. You've been trained in all of this," the dispatcher reassured him.

Working to calm himself, Scott performed a new type of CPR on his wife. No pausing for mouth-to-mouth. Compressions only. Since 2004, the technique has been utilized throughout Arizona to minimize interruptions in blood flow to a cardiac arrest victim's heart and brain. In the last five years, statewide survival has more than tripled. Learn more about "Cheating Death"

"We said it's hard to do a lot worse than 97 percent of the people dying, and so we revamped everything from how we track cardiac arrest, to how we train the public to do CPR and how we train dispatchers to give CPR instruction," said Dr. Ben Bobrow, who oversees emergency services for the Arizona Department of Health. "What we think right now is at the very early stages of cardiac arrest, when someone initially collapses, the really important thing is to just get blood moving though the body, and that's by doing rapid, forceful, uninterrupted compressions."

Let an expert teach you CPR in two minutes »

If Kathie Harden was going to survive, Scott's CPR would need to work for her. Nearly 10 minutes without a heartbeat, she was already technically dead.

"Without blood supply to the brain, to the heart, everything else, you essentially die," said Dr. Lance Becker, who runs the Center for Resuscitation Science at the University of Pennsylvania. "Now we know we can fix many aspects of that. And we can fix it so reliably if we're right there when it happens. Too often, it's somewhere in the streets. Somewhere in their office. Somewhere in their home. Somewhere at the train station. And too often, it takes rescuers time to be there. And what we know happens is in that period of time, that event that would be very easy to fix if I were there in the first 60 seconds, is impossible to fix in 60 minutes. The question is where in that spectrum is the dividing line."

Becker is convinced that death doesn't happen in a moment. It is a gradual process.

"Death doesn't happen by accident. That's part of what we're learning about death -- there's nothing accidental about it -- that at some point there may be an event that triggers it, but after that triggering, lots of the things are programmed. They're very intentional. Those are the things that maybe we can begin to alter," said Becker.

When paramedics arrived at Scott's side, Kathie's pulse was gone.

"I was surprised how young she appeared," said Pete Walka, a paramedic based at Flagstaff Medical Center who responded that night. "When a patient is young, you know, we have a better chance. So right away I was thinking we have a chance to save this person." Have you had a medical miracle? Tweet it and you could win a free copy of "Cheating Death."

As medics attached EKG pads to Kathie's chest to prepare to shock her heart, Scott fled into the living room.

"I didn't want to hear what they were going to do," he said. "They hooked up the heart monitor and the defibrillator. And that defibrillator was so loud. And it talks, you know. And it said, 'Not reading a heartbeat,' and then you hear the tone. So, I knew there was no heartbeat. And then it kept shocking. And it kept shocking. I could hear it. I was sitting in here, and I could hear it all the way out here."

Kathie received numerous shocks and multiple infusions of adrenaline before the paramedics finally restored her heartbeat.

"Getting the pulse back is critical. We want to do that," Walka said. "But, you know, we need to get her to the hospital."

"Her eyes weren't tracking. She did have a heartbeat, but I could tell also that neurologically she wasn't responding to us," said Dr. Carrie Burns, the physician who first evaluated Kathie in the hospital.

Doctors sedated Kathie to relax her body. Had something happened to her that they could address and take care of immediately? Did an aneurysm burst in her head? Did a blood clot go through her lung and into her heart?

"She was a healthy woman with no known past medical history. Not on any medications. And from the history you get from the medics, and then when her husband came, it was a real mystery why this lady had an arrest," said Burns.

Test results ruled out a number of issues, but doctors still couldn't figure out why Kathie's heart had stopped. For now, whatever had killed her for those 18 minutes remained unknown.

"Within an hour and a half that she arrived in ICU, we were already starting to see some improvement in neurologic exam, so that's always very encouraging," said Dr. Michael Reidy, who monitored Kathie's recovery in the intensive care unit.

Doctors kept Kathie cool overnight and throughout the next day, providing Scott updates on his wife's condition.

"I was worried about him," said Reidy. "He's a strong silent type, and he had done exactly the right thing, but he clearly was terrified at losing his beloved wife."

"I made the call to shut off the cooling blanket because it was clear to me that she was going to be OK," said Reidy. "He was there at the bedside, and he got to smile as we watched her wake up."

Eighteen hours after her heart stopped, Kathie Harden was back from the dead.

"You never go to the doctor's office, and expect them to tell you, 'You were dead, and medical miracles happen, and you are now alive,' " Kathie said, still in awe over the events that almost took her life.

"Basically what they're saying is, I caught a virus similar to the flu," Kathie said. "It just kind of attached itself to my heart and deteriorated it until the left side just couldn't work anymore. And the right side compensated as long as it could, and just kind of tired out."

Today, Kathie has an automatic implantable defibrillator and a pacemaker inside her chest to protect her against another sudden, abnormal heart beat.

"There was no way to know my heart was sick," Kathie said, tears welling in her eyes. "I worry what my kids would do if I weren't here. Scott would play the mom role but it's not the same as having your mom. And then we worry about if it's something hereditary. Should we have our kids in for MRIs to make sure? Should Scott go in to have his checked? It's just crazy that a muscle in your body that has to be working in order to give you life, I have no idea if it's really working or not, and that's pretty scary."

Although Kathie is forever grateful to Scott, and to everyone who helped save her life that night, her emotions are still very much on the surface. Her reversal from death has shaken the couple's bond.

"You think it would be, 'Oh, you know, life is great,' you know, but it's been traumatic as a family," Kathie said. "I'm trying to deal with it the way that I think I should be, and he's trying to deal with it in a different realm. And it's hard to see eye to eye on those kinds of things. And it's hard to expect the other person to understand where you're coming from. So I don't think it's what everybody thinks it might be. I think a traumatic experience like this is hard to get through for husband and wife."

In August, Kathie returned to her classroom. She's teaching the third grade. On the night she died and was brought back to life, her own two children slept through the chaos.

"I'm just hoping that I can be here a long time for my kids," Kathie said. "I am back to working full time, so that's really powerful for me and motivating. I don't know if I'll ever be able to put it behind me."