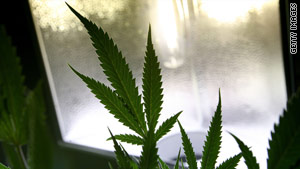 The federal move could encourage other states to make their own laws allowing medical marijuana use.
STORY HIGHLIGHTS
RELATED TOPICS

(Health.com) -- Patients in the 13 states where medical marijuana is legal can now light up without fear of federal reprisal, but they may still have to answer to local authorities.

The Justice Department this week announced that it will no longer seek to prosecute people using, prescribing, or distributing pot for medical purposes, as long as they're in compliance with local law. However, regulations in some medical marijuana states remain murky.

For example, Los Angeles County District Attorney Steve Cooley recently announced a plan to crack down on all illegal medical marijuana dispensaries in his jurisdiction, arguing that they are illegal. In California, as well as several other medical marijuana states, laws governing distribution vary from city to city and county to county. Matters are simpler in Rhode Island and New Mexico, which formally license medical marijuana providers.

Nevertheless, advocates hail the news as a step in the right direction. They say the move will likely encourage more doctors to consider prescribing medical marijuana in states where it's legal. And more patients may try using the drug, which can be prescribed for chronic pain, nausea, and other conditions.

The federal move could also embolden other states to make their own laws allowing medical marijuana use, they say.

"This is a very significant development," says Bruce Mirken, the director of communications for the Marijuana Policy Project, which advocates the full-scale legalization of marijuana. "This is the most significant and most positive development on federal medical-marijuana policy since the Carter administration." Health.com: Coughing and other COPD symptoms

Yvonne Westbrook, of Richmond, California, is in her 50s and has been using marijuana for decades to help manage her multiple sclerosis (MS) symptoms.

"I think it will help people who don't want to break the law but need the medication," she says. "I think it'll open the doors for other states to decide how they want to get the medicine to the people, because it is really very effective."

Randy Barnett, the Carmack Waterhouse professor of legal theory at Georgetown University Law Center, in Washington, D.C., says the new policy will make life easier for those in need of medical marijuana. "It's obvious that if they're not going to be prosecuted by the feds, and they're not going to be prosecuted by the states, they now are free of a huge legal threat," says Barnett, an expert on constitutional law who argued a landmark medical marijuana case before the Supreme Court in 2004. "That's big from the point of view of the sick and suffering." Health.com: Surprising migraine causes and cures

In March 2009, U.S. Attorney General Eric Holder said drug enforcement officials would no longer prosecute medical marijuana use that was allowed by state law, even if it broke federal regulations. The Justice Department's announcement this week basically made the Attorney General's policy official.

Dr. Donald Abrams, a professor of medicine at the University of California, San Francisco, says the announcement "certainly gives the nation sort of new hope that there's beginning to be some recognition that there is some medical value to this ancient medicine."

Abrams is a cancer doctor who prescribes pot to treat loss of appetite, nausea, vomiting, and pain. Instead of prescribing multiple medications for these symptoms, he says, "here we have one medicine that actually can speak to all of those different indications." Health.com: 9 ways to control bipolar disorder

Evidence that medical marijuana works is strongest for the symptoms that Dr. Abrams mentioned, as well as for helping HIV patients to cope with medication side effects and improve their appetite.

However, a host of other health claims are being made for marijuana. Among the best substantiated are the benefits of pot for helping spasticity in patients with MS, Lou Gehrig's disease, and similar conditions. Advocates have also suggested using marijuana for treating psychological problems ranging from depression and anxiety to bipolar disorder and attention deficit hyperactivity disorder, but the evidence here isn't as solid.

Research on the risks of long-term marijuana use is also spotty. Studies to date have found little solid evidence that marijuana is harmful to the lungs or otherwise toxic to the body, says Abrams. Health.com: Factors that increase your asthma risk

But Dr. Jeannette Tetrault, an assistant professor of medicine at the Yale University School of Medicine in New Haven, Connecticut, who has studied marijuana's effects on the lungs, says her review of 34 studies found some evidence linking long-term use to symptoms of chronic obstructive pulmonary disease, like coughing, sputum production, and wheezing. Health.com: 10 no-cost ways to fight depression

The studies she and her colleagues did find were of middling quality, Tetrault adds. "I don't think we know enough to really be in a place where we can say that it's something that we should be allowing," she says. "I think the jury's still out in terms of what it may do in terms of long-term complications."

However, Abrams argues that given the alternatives, pot is pretty safe. "It's not really a toxic agent," he says. "Compared to tobacco, alcohol, and sugar, it's relatively benign."