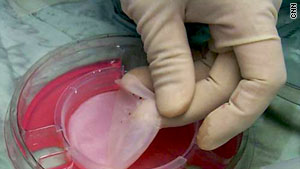 The idea behind a collagen graft is to create a sort of scaffolding upon which a patient's cells can attach and grow.
STORY HIGHLIGHTS

PHILADELPHIA, Pennsylvania (CNN) -- Adell Tomas, who lives outside Philadelphia, Pennsylvania, admits she has a weight problem: Ten years ago, she tipped the scales at more than 300 pounds. Because of her obesity, she developed high blood pressure, arthritis and type 2 diabetes. She says she just didn't take care of herself.

And then one day, she noticed a huge sore on the bottom of her foot. Like many diabetics, she has little feeling in her feet, so she had no idea what had caused the sore or even how long it had been there.

"It was huge and looked terribly infected," she recalled. "Dark red, almost black."

A few weeks later, Tomas' foot was amputated; the wound was so large, her doctors couldn't repair it.

"Doctors said at that time there was nothing they could do," the 51-year-old said.

Now, doctors who specialize in wound management are growing skin to help people like Tomas save their limbs and extremities. Pharmaceutical and biotech companies are extracting collagen -- a protein that makes up 75 percent of skin -- from donated skin and creating grafts, or patches, that can induce a patient's own skin to grow. The donated skin can come from a variety of sources: anything from a pig's pancreas to a baby's foreskin.

Video: Healing wounds
In some cases, we can get four football fields of skin out of one baby foreskin.
--Dr. James McGuire
RELATED TOPICS

"In some cases, we can get four football fields of skin out of one baby foreskin," said Dr. James McGuire, head of wound management at the Foot and Ankle Institute at the School of Podiatric Medicine at Temple University, in Philadelphia. "If taken care of, skin can grow and grow."

In most cases, a scrape or cut mends itself or can be helped along with a Band-Aid and some antibiotic cream. These injuries heal because our skin is designed to repair itself. Yet in the case of large or deep wounds, like Tomas', the skin doesn't heal because it has become so infected, it turns gangrenous and can't grow new cells.

The idea behind these collagen grafts is to create a sort of scaffolding into the wound, upon which a patient's cells can attach and grow.

"Once you take all the cells out of there and strip it down to the collagen level, the body says, 'This is great; this is what we make our bodies out of,' " McGuire said. "And tissues will grow around it."

Although these collagen patches can be used to treat the wounds of soldiers and burn patients, they are more commonly prescribed for people who suffer from peripheral artery disease, pressure ulcers and diabetes.

"The patient can't feel anything, so when they step on a tack or get a blister or a penetrating wound to the skin, it just gets infected and keeps festering. And a lot of elderly [people] who are bedridden in nursing homes develop these horrible bed sores," McGuire said. "These patches can help them."

The patches come from different sources and can contain additional ingredients.

Some patches are created from animal organs, such as cow intestines, and even from the skin of some reptiles. A New Zealand company has developed a patch that contains honey, which is a natural antiseptic. Other patches contain elements such as silver, which has been shown in studies to be an excellent antibacterial agent.

Whether a patient needs a patch from a bovine or a boa is determined by the injury. Depending on its origin, a graft can differ in size, thickness and how fast it generates tissue.

"Although all of these patches can help mend wounds, it really depends on the wound itself as to which patch you should use," McGuire said. "How much is it infected, how long it's been infected, what the infection is, that sort of thing."

For Tomas, it's too late. She is managing the loss of her foot and has dropped almost 70 pounds since she first noticed the wound.

"It's great they can do all these things with fixing injuries," she said. "But had I been watching out for my health and looking at my feet every day, I would have caught that injury before it got nasty."

She shakes her head: "It was really something I could have avoided."