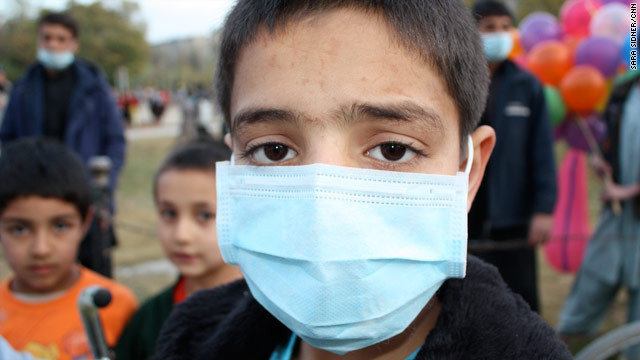 Ramin Nudratt, 11, will be off school for a few weeks as Afghanistan declares a H1N1 public health emergency.
STORY HIGHLIGHTS

Kabul, Afghanistan (CNN) -- It's 1p.m. and squeals of delight reverberate off the apartment complex walls.

A half dozen children are kicking an old soccer ball back and forth in a three-car parking lot.

"I am a student in a school but the schools are off because of brain influenza," second grade student Ahmad Mujtaba Habibi said.

He is painfully shy and has not yet grasped the name of the deadly flu that has caused authorities to shut down every school in Afghanistan for weeks.

But his schoolmates at the sandy, crumbling playground down the street have it memorized.

"I have this mask because there is swine flu in Afghanistan."

Ramin Nudratt talks through a disposable medical mask. He is 11 and was in the middle of doing the thing he says he enjoys second most in life. Riding his bike.

"We get to learn something and to do our homework. It is very good to be in school," Nudratt said. His favorite subject is English.

"My name is Nudratt," he said slowly and deliberately.

But Nudratt and all the other children of Afghanistan won't be able to go to school for at least three weeks. The government declared a public health emergency after the country reported its first death from H1N1. A 35-year-old engineer died in Kabul last week. By this week, seven more were confirmed dead by Afghan officials.

The ripple effect: 8 million students and teachers across the country will have to find another way to spend their days.

"The government and the Ministry of Health have decided to give off weeks despite that it is not good for students education," said Haji Habibi, a father of six. He vowed to use whatever time he has to teach his son at home.

"Prevention is better than a cure," Habibi said. "We prefer life over death."

But there is great fear that there will be more deaths. The Minister of Public Health, Dr. Amin Fatemie, bowed his head saying he has had "many sleepless nights" since the outbreak.

"We need at least 3.3 million doses of Tamiflu," Dr. Fatemie said. Right now the ministry estimates they only have 51,000 doses, which is why prevention is key. Authorities are handing out face masks. They're also asking people not to have traditionally large Afghan weddings in enclosed places.

In some parts of the country where security issues trump all else, getting the message out about prevention is not going all that well, but in Kabul, a glimpse at a playground gives you the sense people are taking action.

You can only sees the eyes of just about every other child on the playground because green tinted disposable medical masks are covering most of their faces.

An eight-year-old swings with the kind of enjoyment only a child can experience. She is wearing her mask as if it has always been a part of her wardrobe.

"I don't want to become sick," she said.