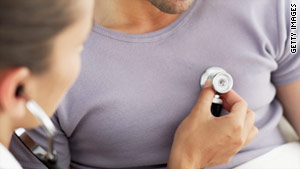 Some studies have shown that statins can be helpful, while others have found no benefit.
STORY HIGHLIGHTS
RELATED TOPICS

(Health.com) -- It's widely known that cholesterol-lowering statins can benefit patients with heart disease, but a new study suggests they may actually harm some people with heart failure.

Heart disease can occur when arteries become clogged, but in heart failure, the heart gets progressively weaker and larger.

Still, since the study included a small number of patients and looked at only one point in time, it's too early to say if the findings have implications for heart failure patients taking statins, according to lead author Lawrence P. Cahalin, Ph.D., of Northeastern University, in Boston, Massachusetts. Cahalin presented his findings on Tuesday at the American College of Chest Physicians annual meeting in San Diego, California.

Dr. Tamara Horwich, an assistant professor of medicine at the University of California, Los Angeles, agrees that the results need to be interpreted with caution. "I just don't think we can draw any conclusions about statins having benefits versus ill effects in some patients," says Horwich, who wasn't involved with Cahalin's study.

In heart failure, the enlarged heart struggles to pump a sufficient amount of blood, which can cause fluid to collect in the limbs and lungs, resulting in shortness of breath and fatigue. However, one type of heart failure, systolic, occurs when the lower chambers of the heart can't contract with enough force to drive blood throughout the body.

In the other type, diastolic heart failure, the heart muscle is so stiff that it can no longer relax enough to fill with blood between beats. About half of people with heart failure have systolic; the other half have diastolic, which becomes more common with age and is more likely to strike women.

About 5 million Americans have heart failure.

Currently, there are no guidelines on whether patients with heart failure should take statins. Some studies have shown that they can be helpful, while others have found no benefit. The decision of whether to prescribe these drugs is typically based on a patient's cholesterol levels, his age, and whether he also has coronary artery disease, according to Horwich.

"There's not a consensus," she says. "It's up to the individual physician to make a decision."

Health.com: Which statin will lower your cholesterol?

Since statins can cause muscle damage, they could theoretically also harm the heart--which is, essentially, a big muscle--although there is no evidence that this is the case. To investigate whether the drugs might affect the heart and other muscles in heart failure patients, Cahalin and his colleagues analyzed data on lung function and exercise tolerance in 136 patients, 61 of whom were taking statins.

Overall, the patients taking statins had worse lung function and exercise tolerance than those who weren't taking the drugs. But when Cahalin and his team analyzed patients with the two different types of heart failure--systolic and diastolic--separately, they found the drugs seemed to help those with the systolic version, and hurt those with diastolic heart failure.

Cahalin says he and his colleagues are planning to follow patients with both types of heart failure over time to see how taking statins affects their symptoms. He speculated that the anti-inflammatory effect of the statins could be helping systolic heart failure patients, while their muscle-weakening effects might impair breathing in those with diastolic heart failure.

A major problem with the study, notes Horwich, is that there were a number of factors that could have contributed to the findings; for example, it's not clear from the study why doctors chose to put some patients, but not others, on statins. Systolic heart failure patients may have seen more benefits because they were more likely to have coronary artery disease, she adds.

According to Cahalin, it could make sense to do a simple lung function test on heart failure patients before prescribing statins. That way, he says, it would be easy to tell if their lung function got worse while they were on the drugs.

And if someone with diastolic heart failure is prescribed the drug and his or her heart failure symptoms--such as weakness, fatigue, and shortness of breath--get worse, he adds, "that should be investigated."