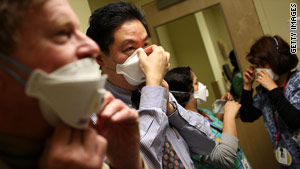 Researchers say the difference in infection rates between mask and N95 users was not statistically significant.
STORY HIGHLIGHTS

(Health.com) -- A preliminary report suggesting that N95 respirators -- filtering devices worn over the mouth and nose -- protect against swine flu better than surgical face masks seems to be incorrect, researchers revealed during a meeting of the Infectious Diseases Society of America (IDSA).

In fact, surgical face masks, which are cheaper and easier to wear, may be just as good as N95 respirators. At the very least, researchers can't prove that one is better than the other. It's the latest wrinkle in a continuing debate over how to protect health-care workers from the H1N1 virus, also known as swine flu.

Raina MacIntyre, Ph.D., a professor of infectious diseases epidemiology and the head of the University of New South Wales School of Public Health and Community Medicine, in Sydney, Australia, says the research team didn't exactly retract the findings.

"We simply did the analysis of the same data differently for the final paper," she explains.

I would certainly wear an N95 respirator if I were exposed to infectious patients.
--Raina MacIntyre, Ph.D.

For the new analysis, the researchers removed a control group of nearly 500 health-care workers and made other statistical adjustments. Ultimately, the difference in infection rates between mask and respirator users was not statistically significant.

"[The study] still shows a likely superiority of N95s, with half the rate of infection compared to surgical [masks]," MacIntyre says. "But the study was probably underpowered to pick up statistical significance when we removed the control group."

"I would certainly wear an N95 respirator if I were exposed to infectious patients," she adds.

The N95 respirator is a tightly fitted facial mask designed to filter out even very fine airborne particles, according to the U.S. Food and Drug Administration. Looser-fitting surgical masks protect against large-particle droplets, splashes, sprays, or splatter, the FDA says, but they don't completely block the germs from coughs and sneezes.

Health.com: Secret natural ingredient: How grapes can whiten teeth and fight off colds

To figure out which protective device is best, MacIntyre and her colleagues tracked hospital workers in Beijing, China, who wore surgical masks or N95 respirators, and compared rates of influenza and respiratory illness. Preliminary findings were presented at a meeting of the Interscience Conference on Antimicrobial Agents and Chemotherapy in September 2009. Final results have yet to be published.

Track H1N1 flu around the country

The only other randomized clinical trial comparing health-care workers' use of respirators and surgical masks was published online in October 2009 in the Journal of the American Medical Association. Canadian researchers reported no difference in influenza rates among nurses using one type of protective device versus the other.

It doesn't make much sense to be using different precautions for seasonal flu than we use for H1N1.
--Mark E. Rupp, M.D.
RELATED TOPICS

Both studies helped inform an Institute of Medicine (IOM) panel that, in September 2009, issued a report recommending the use of fitted N95 respirators by health-care workers who interact with patients with confirmed or suspected cases of H1N1. (MacIntyre was also a member of that panel.) However, because the two studies were preliminary, the committee said that it could not draw conclusions from either.

"The take-home message for me is that, in clinical settings, wearing a mask or an N95 appears to be essentially equivalent," says Mark E. Rupp, M.D., a professor of infectious diseases at the University of Nebraska Medical Center in Omaha and president of the Society for Healthcare Epidemiology of America (SHEA).

Data presented at the IDSA meeting also highlighted the problems with N95 respirators, Rupp says. Health-care workers say that the respirators are uncomfortable and more difficult to wear than face masks, and that they make it hard to speak with patients, among other problems, he explains. They're more expensive too.

Although respirator use made sense at the beginning of the swine flu pandemic, it now appears that H1N1 behaves similarly to seasonal influenza, Rupp says, so "it doesn't make much sense to be using different precautions for seasonal flu than we use for H1N1."

The SHEA would like to see federal guidelines revised, he says.

Still, government health and safety organizations are standing by the more stringent standard of protection.

IOM spokeswoman Christine Stencel says that the National Institute for Occupational Safety and Health and others have provided "convincing data" on the ability of the respirators to filter out a large percentage of tiny particles.

"Based on all the available evidence and data that the committee had to look at, [it recommended] that the N95 respirator afforded the best potential protection against airborne transmission of the virus, and therefore that was the recommendation for health-care workers in terms of respiratory protection," she says.

The Centers for Disease Control and Prevention developed its policy independently of the IOM and the MacIntyre study, explains CDC spokesman Jeff Dimond. However, it's similar in terms of respirator use. The CDC recommends that health-care workers in close contact with people with suspected or confirmed H1N1 influenza use a properly fitted, disposable N95 respirator, or something that offers similar or better protection.

The current recommendation is based on unique conditions associated with the existing pandemic, including low levels of population immunity to 2009 H1N1, the potential for health-care personnel to be exposed to H1N1 patients, and other factors, Dimond says.

In October 2009, the Occupational Safety and Health Administration (OSHA) said it would soon issue a "compliance directive" to ensure that health-care facilities have controls in place to protect workers from occupational exposures to swine flu. OSHA said its directive would closely follow the CDC's guidance.

In Rupp's opinion, the respiratory protection debate has distracted from other crucial flu-fighting measures. These include:

• Preaching respiratory etiquette programs. Patients who are ill should be asked to wear a surgical mask to contain their secretions, he says, and they should use tissues and wash their hands frequently to prevent touch contamination.

• Getting seasonal and H1N1 vaccines. "For health-care workers, that is by far the best way to protect them," he says.