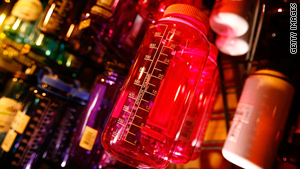 Several companies have announced that they will voluntarily phase out the chemical from their products.
STORY HIGHLIGHTS

(Health.com) -- Bisphenol-A, a chemical found in hard, clear plastic used to make everything from baby bottles to food packaging, may increase the risk of erectile dysfunction and other sexual problems in male factory workers exposed to large amounts of the substance, according to a study conducted in China.

The health effects of BPA have been hotly debated; although some studies have linked BPA to a risk of brain damage, birth defects, hyperactivity, heart disease, early puberty, obesity, and prostate cancer, other research suggests that the low level of exposure from plastics doesn't pose a health risk to adults. (The picture is less clear for children.)

Part of the problem is that much of the research has been conducted in mice and other animals, and its validity in humans is controversial. Although not conclusive, the potential health effects have caused some baby-bottle and water-bottle manufacturers to stop using the chemical, at least in part because of public concern. BPA is not found in soft, pliable plastic used in most water bottles.

Now, the new study -- one of the first to be conducted in humans -- seems to support a finding previously reported only in animal research.

Among the men who work with BPA, the risk of having difficulty ejaculating was seven times greater than it was among the non-exposed group, and the risk of erectile problems was more than four times greater. The BPA-exposed workers also reported higher rates of low sex drive and lower overall satisfaction with their sex lives, according to the study, published this week in Human Reproduction and funded by the National Institute of Occupational Safety and Health.

Health.com: Why erectile dysfunction is so common in men with diabetes

Researchers compared the rates of sexual dysfunction in two groups of workers in China -- 230 men who worked at factories that produce BPA or epoxy resin (which contains the chemical), and some 400 men, including workers in other industries, who were not exposed to abnormally high levels of BPA. Epoxy resin is used in the lining of canned foods and is another potential source of BPA in addition to hard, clear plastic.

The men who worked in the BPA and epoxy-resin factories were exposed to levels about 50 times higher than average.

The greater a worker's exposure to BPA -- which was measured using spot air and urine samples -- the more likely he was to have sexual dysfunction. Yet the dysfunction was apparent even in workers who had worked in a BPA factory for one year or less.

"This was a very compelling study," says Dr. Rebecca Sokol, the director of the andrology program at the University of Southern California's Keck School of Medicine, who specializes in the effects of toxins on the reproductive system. "It's not cause and effect, but when you have the kind of ambient air quality assessment that they made, it comes pretty close to cause and effect."

In the past, the scientists and industry representatives who have argued that BPA is safe at the low level of exposure that occurs for most people have pointed to the lack of BPA research in humans, says the lead author of the study, Dr. De-Kun Li, a reproductive epidemiologist at Kaiser Permanente's Division of Research, in Oakland, California.

The findings of Li and his colleagues are consistent with the hypothesis that BPA, when it enters the body, can mimic the effects of estrogen and may block male sex hormones (including testosterone). The study has implications beyond male sexual dysfunction, however, since sexual dysfunction is often associated with broader reproductive health problems.

Health.com: Why erectile dysfunction is so common in men With diabetes

And the fact that a health effect observed in animal studies has been seen in humans, says Li, suggests that the other findings of animal studies -- an increased risk of cancer and obesity, for example -- need to be taken more seriously. "We cannot dismiss them anymore," he says.

Experts caution that the results need to be replicated in other studies, and also in the United States.

The study "opens a new front in [BPA] research," says Peter Myers, a BPA expert and the chief scientist at Environmental Health Sciences in Charlottesville, Virginia. "But as is absolutely necessary when a new front like this is opened up, we need to see replication."

It's unclear, for instance, whether the everyday exposure to BPA that people receive from food packaging and other plastics is significant enough to produce the sexual dysfunction seen in workers who were inhaling the chemical all day.

The BPA levels measured in the study were "extraordinarily high," says Sokol, and they may have little or no relevance to "somebody drinking water out of a bottle."

But, she adds, "We need to be prudent and cautious about whether this chemical actually is impacting reproduction. People have to stop and say, 'Whoa, now we're starting to get data in animals that is manifested in humans.'"

The study did have some weaknesses. It was relatively small for an epidemiological study, according to Sokol, and the rate of erectile difficulty among the BPA workers was still relatively low overall -- a little more than 15 percent.

This study comes amid mounting concerns over the safety of BPA from consumers, scientists, and public officials. In the summer of 2009, Canada said it was moving towards a ban on the sale and import of BPA-containing baby bottles. A number of states and cities, including Minnesota and Chicago, have passed similar bans or have taken steps to do so. Several companies have also announced that they will voluntarily phase out the chemical from their products.

The U.S. Food and Drug Administration (FDA) is also in the midst of reconsidering its stance on BPA. In August 2008, largely on the basis of research funded by the chemical industry, the agency issued a draft assessment on the safety of BPA in food packaging, concluding that "an adequate margin of safety exists for BPA at current levels of exposure" from those sources.

The FDA report caused an uproar in the scientific community and was soon contradicted. The National Toxicology Program (NTP), a federal agency that advises the FDA on chemicals and other environmental toxins, released its own report expressing "some" concern about the potential effects of BPA on the brains, behavior, and prostate glands of fetuses, infants, and children, as well as "minimal" concern about earlier puberty for girls.

The NTP classified its concerns over reproductive effects from workplace BPA exposure as "minimal."

Soon after, the FDA's own Science Board released a report that cited the FDA's exclusion of a large number of animal studies on BPA, and concluded that the agency may have overestimated the safety of the chemical. Following the release of these reports and a spate of media attention, the FDA announced that it would reconsider its assessment. In mid-August 2009, the agency indicated that it will continue to review the research on BPA effects in humans and will "decide next steps" by the end of November 2009.

Although the study of Li and his colleagues isn't likely to drastically change the course of the debate (additional studies will be needed for that to happen), it will help keep the spotlight on the health effects of BPA.

"This study forces some new questions into the arena that need to be answered," says Myers.