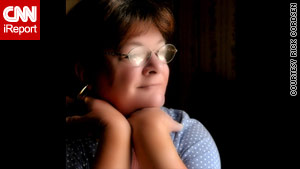 Kathi Cordsen is a firm believer in checking her breasts, because her mother found a tumor that way.
STORY HIGHLIGHTS

(CNN) -- A vacation to Washington nearly a decade ago led to a life-changing revelation for Kathi Cordsen. Passing by a breast cancer awareness event, her mother blurted it out: Her doctor had just confirmed that she had breast cancer.

She'd found the lump during a self-examination.

Fortunately, Cordsen's mom had found the cancer so early that she was able to have a lumpectomy and didn't need chemotherapy or radiation. That's why, today, Cordsen checks her own breasts every day in the shower.

"It was such an inspirational thing to find out that it saved her life, that's for sure," said Cordsen, 57, who submitted her story to CNN's iReport. "It's just important, to want to live and take care of yourself."

New guidelines from the U.S. Preventive Services Task Force say that women age 40 to 49 don't need to have routine mammograms anymore and that breast self-exams aren't recommended in general. The group found no evidence that self-exams reduce breast cancer death rates, and it discourages teaching women how to examine themselves.

Although major cancer-awareness groups such as the American Cancer Society and Susan G. Komen for the Cure disagree with the new guidance on mammograms, continuing to recommend routine mammograms for women 40 and up, guidance on self-exams has been trending toward the task force's suggestions.

Both the American Cancer Society and the Komen foundation have been advocating that women be "aware" of their breasts rather than do a formalized self-examination procedure a few days after the menstrual period once a month.

The American Cancer Society makes no recommendations for how often or in what capacity a woman should check her breasts, just that she should be aware of any changes, said Dr. Len Lichtenfeld, deputy chief medical officer.

Being told to do this formal procedure resulted in "a huge guilt trip" for women who developed breast cancer, he said.

When Cordsen did find lumps, which turned out to be benign, she felt "scared to death." Still, she's shocked that the task force and several organizations would recommend against teaching self-exams.

The Komen organization has been focusing on letting women know what they should be looking for, rather than the procedure itself, said Susan Brown, director of health education. Here's the group's guidance.

"We're not telling people to do it or not to do it," she said. "We're focusing on what's normal for you."

The existing research on the subject does not conclusively support breast exams. The Komen Web site cites a meta-analysis of the the two largest randomized controlled trials, one from China and one from Russia. These trials found no difference in breast cancer deaths after 15 years between women who regularly self-examined and women who did not. Moreover, those who did check themselves had almost twice as many biopsies with benign results as those who did not.

Cordsen, however, thinks it's "crazy" to tell women not to examine their breasts.

But the cancer groups clarify that they're not saying "don't check your breasts"; they're just not for teaching a formal process anymore and want you to be aware of any changes.

When the Komen group turned its focus away from the self-exam process, some women who had found their own breast cancers did complain. But when Brown spoke to some of these women individually, she realized that they had largely detected lumps by coincidence -- they happened to notice a change in their bodies -- rather than during a formal self-exam at a scheduled time of the month.

At M.D. Anderson Cancer Center in Texas, doctors do not recommend that women formally examine their own breasts either. They preach "breast awareness" instead, said Dr. Therese Bevers, medical director of the center's Cancer Prevention Center.

"We were overcomplicating this, and it actually was a turnoff for a lot of women," she said. "Women go, 'I don't know how to do it, so I don't do it.' "

Generally, women should be aware of their bodies and should notice something like a lump on their breasts to the same extent that they would on their arms.

Awareness is also the main message for Dr. Anne Wallace, professor of surgery and director of the Moores Breast Cancer Program at the University of California-San Diego. Knowing your health history, when you've had sex and what's new to your body are important, she said.

Still, there are patients who would benefit from self-exams if they did them. Wallace has seen patients with large dents in their breasts and tangible masses within. When she asks them whether they had noticed anything there, they say, "Oh, gosh. I can't touch my breast. I don't know if it's new," she said.

The emotional weight attached to self-exams is so great for some women that Wallace advocates putting associated public health money toward mammograms, rather than trying to get women to be more comfortable with examining their own breasts.

"If you're used to feeling your breasts and know your lumps and bumps, then keep doing it, but if they scare you or whatnot, don't make it happen," she said. "I think we should have, years ago, lightened up on it."

Wallace estimates that 50 percent of women routinely feel their breasts for lumps.

Dr. Lori Goldstein, director of the Breast Evaluation Center at Fox Chase Cancer Center in Philadelphia, Pennsylvania, also cited the China study that showed no benefit in self-examination but said it's "value-added and complementary to mammography screening."

What else helps and hurts

Part of breast cancer risk has to do with genetics, and particularly strong links have been found to the genes BRCA1 and BRCA2. You should be aware of your own risk by taking into account your family history.

There are, however, actions that women can take to help prevent breast cancer besides having mammograms, having clinical exams and being aware of changes in their breasts.

Maintaining a healthy weight as an adult, especially after menopause, is important in decreasing risk, Brown said. Physical activity has also been shown to decrease risk in women generally, she said.