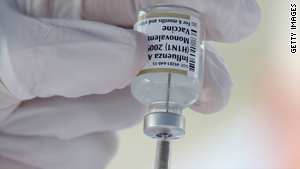 Some parts of the country are seeing a small decline in H1N1, as others, including Maine and Hawaii, see an increase.
STORY HIGHLIGHTS
RELATED TOPICS

The Centers for Disease Control and Prevention said 43 states now have widespread flu activity, compared with 46 states last week and 48 states at the beginning of November.

"It's still much greater than we would ever see at this time of year," Dr. Anne Schuchat, director of the CDC's National Center for Immunization and Respiratory Diseases, said in a news conference.

Schuchat added that while some parts of the country are seeing a small decline in flu cases, other areas, including Maine and Hawaii, have seen a bit of a surge.

It's too early to know if the worst is over in terms of the flu season, she said.

"Even though we saw a little bit of a decrease this week, it is still higher than the peak activity in many years," she said.

Flu season doesn't usually start until December. But when the H1N1 virus emerged in April, the spread of the flu never stopped, effectively stretching last year's flu season into the new one.

The CDC also said 21 more deaths from H1N1 in children were reported in the past week, bringing the official toll of confirmed pediatric H1N1 deaths in the United States to 171.

"We believe the estimates we provided last week give a better picture of the full toll that the virus has taken in the first six months of the pandemic," she said. Last week the CDC reported that it estimated 540 children had died from complications of this flu virus so far.

In an effort to limit further spread of the virus as millions of Americans begin traveling for the holidays, the CDC has launched a public awareness campaign.

"Travel only when you are well," she told reporters. "Wash your hands often. ... Cover your cough and sneeze with tissues or with your sleeve. ... And get vaccinated against flu, particularly if you're in a targeted population."

More people will be able to get vaccinated, according to the CDC, because more vaccine continues to be available.

States have been able to order a total of 54.1 million doses of H1N1 vaccine so far, Schuchat said.

"That number is 11 million doses more than we were at a week ago."

In response to a report from Norway that a couple of people died from a mutated form of the H1N1 virus, Schuchat said the CDC is aware that the mutated form had been identified, but that H1N1 vaccine and antiviral medications still are effective against H1N1.

Some cases of H1N1 that show resistance to the antiviral Tamiflu have been identified in North Carolina and Wales. But Schuchat said Tamiflu-resistant influenza viruses have been "quite rare" so far.

Tamiflu doesn't cure the flu, but can reduce symptom severity and duration of illness by about a day if taken within the first day or two of getting sick.