Hand sanitizer: How it protects you 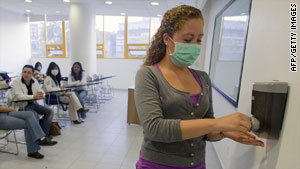 (CNN) -- It's everywhere you look -- in schools, in shopping malls, in day care centers, in offices.

Hand sanitizer has become ubiquitous after the outbreak of the novel H1N1 flu virus. But what are its special powers? Does it really protect from viruses? And what's the best way to use it?

When it comes to choosing a hand sanitizer, the Centers for Disease Control and Prevention recommends the ones with alcohol for protecting against the H1N1 flu. The optimum proportion is 60 to 95 percent alcohol, according to this CDC chart showing the relative effectiveness of different types of sanitizers.

Dr. Anne Schuchat, director of the National Center for Immunization and Respiratory Diseases, said in a recent briefing that people should wash their hands often with soap and water or alcohol-based hand sanitizers to combat the flu.

"We are beginning to see some declines in influenza activity, but there is still a lot of influenza everywhere," she said.

The CDC said that according to some estimates, up to 80 percent of all infections get spread by hands.

If neither soap and water nor alcohol-based products are available, other hand sanitizers that do not contain alcohol may be useful, the CDC Web site said.

Hand sanitizers are effective against both bacteria and viruses, health experts say.

The active ingredient in hand sanitizer -- usually alcohol -- disrupts the coating of virus and bacteria particles. By damaging the outside of the particle, the virus becomes deactivated, says Andrew Pekosz, associate professor of microbiology and immunology at the Johns Hopkins University Bloomberg School of Public Health.

The sanitizer works on contact, meaning it's only effective on the parts of your hands that it touches. That means if you miss a spot between your fingers, there could still be viruses or bacteria in that place, said Dr. Lisa Bernstein, an assistant professor at Emory University School of Medicine.

"You have to cover whole surface of hands and allow it to dry," she said.

The process of putting it on your hands makes the sanitizer work against these viruses almost immediately. But it does not protect you against whatever you might touch next, Pekosz said.

During a regular workday, using hand sanitizer three to five times randomly would be good, Pekosz said. If you're sneezing or coughing, you should use it more frequently.

Here's another rule of thumb: Whenever you go into a new room for a meeting or whatnot, put some on before and after, he said.

Scrubbing your hands with soap and water -- the CDC recommends for 15 to 20 seconds -- is better than using hand sanitizer, experts say.

That's because washing physically removes the virus particles, instead of just deactivating them, Pekosz said. But it's hard for people to wash their hands that often, he said. The CDC recommends using hand sanitizer when soap and water are not available.

Because of the general way that hand sanitizers interact with bacteria and viruses, there is little chance of resistance developing in the way that bacteria no longer respond to some antibiotics, he said.

Beyond the practicality of it, there is also an emotional importance to hand sanitizer, Bernstein said. But if you don't use the sanitizer correctly, it does give a false sense of security.

"It gives you not just the feeling that you're doing something, but if you are using it effectively, you can do something," she said.