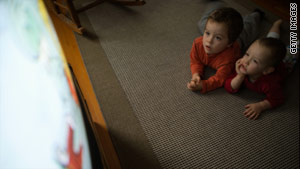 About 70 percent of home-based day care in the survey used television to educate or entertain preschool children.
STORY HIGHLIGHTS

(CNN) -- Think your children are getting hours of playtime, story readings and stimulating lessons at day care? Maybe they are, but they could also be spending a chunk of their day watching TV or DVDs.

New research published in the December issue of the journal Pediatrics found that kids in child care settings could be watching as much as 2.4 hours of television on an average day.

A study from the Center for Child Health, Behavior and Development at Seattle Children's Research Institute examined 168 child care programs and found that 70 percent of home-based and 36 percent of center-based programs showed television to preschool kids.

"Most parents don't know what happens at their children's preschool," said author Dr. Dimitri Christakis, who directs the Center for Child Health in Seattle, Washington. "They really want to believe that they leave their children there, it's preparing them for school, it's a stimulating, enriching environment. And I don't know that they're aware that in fact, a lot of time is spent watching TV."

Researchers surveyed licensed home-based and center-based day cares in Michigan, Florida, Washington and Massachusetts, that took care of children under the age of 5.

Previous estimates that children spend about two to three hours a day watching television are inaccurate, because those numbers relied on parents to calculate the number, Christakis said. Many pre-school children spend their days away from their parents.

"Prior studies quantify TV that children watch at home, but no one quantified the amount they watch at day care," Christakis said.

Since previous studies reported that children watch about two to three hours of TV at home, and this recent study indicated that some day care centers show about 2.4 hours of screen time, some American preschool children could be watching as much as five hours a day, Christakis said.

"When you consider they're only awake 12 hours a day, they're spending almost half their waking hours in front of the screen," he said. "At that level of viewing, it really begs the question of what are these children not doing? What are they missing out on during the five hours they're passively watching TV?"

Face-to-face interactions such as engaging with the children with toys or reading books are more stimulating, experts said. Extensive TV watching for young children has been associated with shorter attention span, childhood obesity and developmental issues such as knowing fewer words and being less prepared for school, doctors said.

When you consider they're only awake 12 hours a day, they're spending almost half their waking hours in front of the screen.
--Dr. Dimitri Christakis
RELATED TOPICS

"In terms of rapid brain development, TV is a relatively impoverished environment for stimulating optimal brain development," said Dr. Michael Rich, a pediatrician and director of Center on Media and Child Health at the Children's Hospital Boston, who is not associated with the latest study. "The kids are never forced to stimulate or use their own imaginations. They're used to pre-processed fictional worlds. They often don't develop the habit of imaginary play."

Some day cares could be operating under the misconception that TV is beneficial, said Christakis, who is also a professor of pediatrics at the University of Washington School of Medicine. Ninety percent of the surveyed centers reported that they used TV for educational or entertainment reasons.

"We as a culture still believe that TV time is benign, that it's OK," said Rich, an associate professor of pediatrics at Harvard Medical School. "I think it shows how much we as a society need to learn about the effects of TV."

Although it's unclear why the home-based day cares showed more TV, possible factors include less staffing and lower education levels of owners who run home-based centers, Christakis said. The report found that 70 percent of center-based program owners had a college degree compared with 51 percent of home-based owners.

While children could be watching educational programs like "Sesame Street," pediatricians say TV viewing takes time away from more critical and interactive abilities that are more conducive to development.