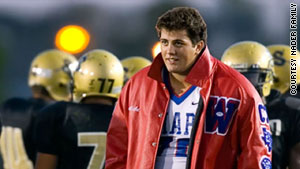 (CNN) -- Matt Nader felt as if he had swallowed a grenade.

The intense heat in his chest was unbearable. During a 2006 high school football game, the young lineman collapsed.

A muscle twitch caused the 315-pound teenager's heart to stop pumping. He awoke in an Austin, Texas, hospital, with a new miniature internal defibrillator implanted in his chest. There was more bad news. His football career, doctors warned, was over. They told him, the strain on the field could trigger another heart attack for the 17-year-old.

"My dream was taken away from me," said Nader. "I didn't get a chance to fight for it."

Nader had suffered from ventricular fibrillation, in which the heart's activity becomes disordered and starts to pump little or no blood. The fibrillation occurs when he becomes exhausted or has a lot of adrenaline.

For people like Nader who learn they have a potentially lethal heart condition, it could mean the abrupt end of lifelong ambitions. Despite the disappointment, Nader and other patients have had to chart new courses.

Standing at a staggering 6 feet 7 inches, Nader seemed custom-made for the offensive line. He had committed to University of Texas, one of the most prestigious football programs in the country, and he hoped to play in the National Football League one day. But doctors warned him that the exhaustion and strain in football could trigger another cardiac episode.

My dream was taken away from me. I didn't get a chance to fight for it.
--Matt Nader

Letting go wasn't easy -- especially after spending more than half of his life training. What helped, Nader said, was keeping busy.

These days, the college junior cheers for the undefeated Longhorns from the sidelines and assists the line coach at the University of Texas, which honored his athletic scholarship. He hopes to get into coaching and sports broadcasting someday.

Nader also became an advocate, supporting state legislation that required automated external defibrillators to be available at every Texas school and volunteering with the American Heart Association. His career-ending injury had an unforeseen benefit.

"I was a very, very nervous person. I was very nervous about football. Once I stopped playing football, it was a stress relief," he said. "It's been over three years since I played football. I really realize there's more to life than football. My coach, my family have helped me out with that."

A key to successful transitions is to have supportive relationships, said Alan Deutschman, the author of "Change or Die," which explores the difficulties of making changes. "It's enormously helpful," he said. "You need a relationship with a person or a group of peers that inspires hope."

Like Nader, Beth Flowers credits her family for getting her through tough days.

For three years, Flowers constantly zipped through 70-hour work weeks overseeing a community radio station, fundraising, and managing 400 volunteers in a job she described as "my calling."

In 2006, she noticed that when she exercised, she felt dizzy and short of breath.

When you're faced with the question at 39 that I might have a stroke if I don't quit, that's a compelling reason to make a drastic decision.
--Beth Flowers
RELATED TOPICS

When the Fort Collins, Colorado, resident visited her doctor, she learned that her blood pressure and pulse rate were high. So much plaque had built up in her arteries that doctors likened hers to those of a 55-year-old, not someone her age -- 39. She also had high C-reactive protein readings, which indicate inflammation in the body.

"When you're faced with the question at 39 that I might have a stroke if I don't quit, that's a compelling reason to make a drastic decision," she said.

Though she was the primary breadwinner, she decided to find a less stressful job. She and her husband started an audio consulting firm that allowed her to work from home, without overseeing hundreds of employees and juggling the responsibilities of an entire radio station.

Flowers cut salty foods from her diet and started to walk, run or practice yoga five times a week. Two years later, Flowers no longer has to take beta blockers, which kept her heart rate and blood pressure under control, and plans to start a full-time job next year.

"It's so cliché, to say you want to stop and smell roses, but you have to," she said. "Just slowing down and noticing things around you brings so much calm that your blood pressure stays down."