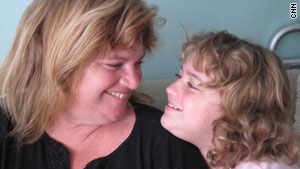 Hayli Murphy, with mom Julie, tested negative for the H1N1 virus twice despite being infected.

(CNN) -- Hayli Murphy hears her mother's cell phone ring, and she bounces off the couch to get it. Watching her run around, it's hard to believe that just a few weeks ago, the 9-year-old was heavily sedated in a pediatric intensive care unit, a ventilator doing the job her lungs -- ravaged by H1N1 flu -- could no longer do.

"She was right there. She was at death's door," remembered her mother, Julie Murphy.

Looking back at her daughter's illness, one of the things that strikes her mother is that in the days before Hayli was admitted to the hospital, a test showed that she did not have the flu -- twice.

Dr. Andrew Pavia, chairman of the pandemic influenza task force for the Infectious Diseases Society of America, and others are concerned that doctors are being misled by rapid flu tests and failing to treat patients who, like Hayli, really do turn out to have the flu.

"We've been seeing these rapid flu tests cause problems," Pavia said. "These tests are certainly quick and relatively inexpensive, but the problem is, they're not terribly accurate."

Hayli Murphy was given her first rapid flu test in the emergency room September 21 after spiking a fever. The result was negative, and doctors sent her home.

"They said, 'she's fine. She doesn't have the flu. She's got a virus. Give her Motrin and Tylenol, and she'll be fine,' " Murphy remembered.

The next day, when Hayli's fever hit 104 degrees and she felt sicker, Murphy brought her back to the ER, where she says a rapid flu test again showed that Hayli didn't have the flu. Doctors diagnosed pneumonia and gave Hayli antibiotics.

Then, the next day, Hayli became so weak that her mother had to carry her into the emergency room.

"I picked her up off the couch and told my older daughter, 'Open the car door. I'm going to the hospital,' " she recalled.

This time, Hayli was admitted and put on the antiviral medication Tamiflu, which is most effective when given within 48 hours of developing flu symptoms.

"If they had given her Tamiflu earlier, that might have helped her not get into the state she was in," Murphy said.

The Tamiflu given so late in Hayli's illness wasn't enough to stop the H1N1 virus. Hayli spent the next 43 days in the intensive care unit, where day to day, no one knew whether she would live or die.

"The doctors said, 'We're at a point where we can't help her anymore. We're doing everything we can,' " Murphy remembered.

"She was really on the edge of losing her life," said Dr. Roberto Monge, one of the doctors who treated Hayli in the hospital. "The virus mainly affected her lungs, but it affected other organs as well."

A sophisticated DNA-based test done in the hospital showed that Hayli did in fact have H1N1 flu. Although it's highly accurate, it can take days to get a result, and it's more expensive than the rapid test commonly given in doctors' offices and emergency rooms.

Pavia says studies of rapid flu tests show that a negative result is wrong about half the time.

"I've seen occasions where a rapid test is negative, and so both the patient and the doctor figure this can't be the flu. The patient gets sicker, and over the next 24 to 48 hours, the person ends up in the hospital or, in rare cases, dies," said Pavia, also chief of the department of pediatric infectious diseases at the University of Utah.

Keep up with the latest H1N1 news

One company that makes rapid flu tests says doctors should use them with care.

"Doctors should be aware that a negative result does not fully exclude the possibility that the patient has influenza," said Colleen White, a spokeswoman for BD. "Following a negative rapid test, physicians have the option to proceed to more advanced tests."

"When in doubt, treat"

Dr. Rhonda Medows, commissioner of the Georgia Department of Community Health, says she tells doctors in her state not to use the rapid tests. "I don't see the value," she said.

Instead, she advises physicians to follow their own judgment. "Do what we've always done as physicians: listen to your patient, and listen to their history," she said.

The Centers for Disease Control and Prevention recommends that doctors prescribe antiviral medications even when a rapid flu test is negative if the patient is severely ill, is deteriorating rapidly or belongs to certain high-risk groups.

"In the middle of a flu epidemic, if you have someone who's sick with asthma or heart disease or something else, or if someone's getting much worse, treat them for the flu even if the rapid test is negative," Pavia said. "When in doubt, treat."

He says he's concerned that not everyone is listening. "Doctors haven't gotten the message yet, and they really need to get the message," he said.

Track the H1N1 flu in your state

In Hayli's case, the doctor who treated her said the ER staff members did not rely solely on the tests. Monge says a clinical exam of Hayli on both emergency room visits indicated that she did not have the flu.

"She would have been dead within the next 24 hours"

Julie Murphy says she knows that if she'd listened to the rapid flu test, Hayli "would have been dead within the next 24 hours," because she wouldn't have sought care for her daughter.

Most children, fortunately, don't suffer with H1N1 the way Hayli Murphy did. The CDC estimates that out of the 8 million people below the age of 18 who contracted swine flu between April and the middle of October, 36,000 were hospitalized, and 540 died.

If your child has H1N1 flu and you're concerned that he or she may take a turn for the worse, here are five signs to watch out for.

"Your child's chest should be moving very smoothly," said Dr. Arthur Lavin, associate clinical professor of pediatrics at Case Western Reserve University School of Medicine in Cleveland, Ohio. "He shouldn't have to tug to get air in and out."

2. Numb or blue fingers or toes

Andrea Samples knew that it was time to hightail it to the emergency room when her 15-year-old daughter, Jessica, said her fingers felt numb.

Jessica ended up spending two weeks in the intensive care unit at Cook Children's Hospital in Fort Worth, Texas. Her heart was not working properly and couldn't pump oxygenated blood to her extremities, according to Dr. Linda Thompson, who helped take care of Jessica.

Jessica had been to another emergency room and to an urgent care center in the two days before being admitted to Cook Children's, and she was sent home.

Samples says it was frightening how quickly Jessica went from being mildly ill to being on death's door.

"At first I thought she had a sinus infection, but she deteriorated quickly. Everything happened within hours," she said of her daughter's illness in September.

If your child can't touch her chin to her chest, it could be a sign that she has a complication of the flu called meningitis, Lavin says.

4. Symptoms improve and then return

If your child gets better but then the fever returns and the cough comes back even more severely than before, you should get medical care for your child right away, according to the CDC. This could be a sign of a secondary infection.

Another emergency sign in children who have H1N1 is a fever with a rash, according to the CDC.

The CDC has more emergency warning signs parents need to watch out for.

Perhaps the most telling sign that your child needs medical attention immediately is if something just doesn't seem right: if your child seems much worse than before or is just not herself.

"If your child somehow seems like a different person or is acting differently, that would be very worrisome," Lavin said.

CNN's John Bonifield and Sabriya Rice contributed to this report.