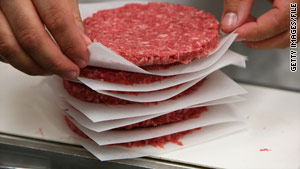 Washington (CNN) -- More than 20,000 pounds of beef have been recalled by a California company amid worries the meat is linked to two cases of salmonella, a federal food safety agency said.

Beef Packers Inc., based in Fresno, California, recalled 22,723 pounds of ground beef products produced on September 23, the U.S. Department of Agriculture's Food Safety and Inspection Service said in a statement. The labels on the beef include the establishment number "EST. 31913," the agency said.

The beef was repackaged at a distribution plant in Arizona, then sold under different retail brand names, the agency said. The agency's statement did not identify brand names.

The products were sold in Arizona and New Mexico, said Mark Klein, spokesman for Cargill Inc., which owns Beef Packers, Inc. Consumers in those states should check with stores where they purchased meat to determine if they bought the recalled beef.

Investigators have found an association between the meat and two Arizona people who have the "Salmonella Newport" strain, the Food Safety and Inspection Service said. That strain is resistant to many commonly prescribed drugs, increasing the risk of hospitalization or ineffective treatment, the agency said.

The most common symptoms of salmonellosis -- the bacterial foodborne illness caused by the salmonella infection -- are diarrhea, abdominal cramps and fever. Additional symptoms may be chills, headache, nausea and vomiting that can last up to seven days.

Cargill spokesman Klein said the company is cooperating with the government.

"We take these matters seriously which is why we have initiated the recall and have cooperated with the government," Klein said in an e-mail to CNN.