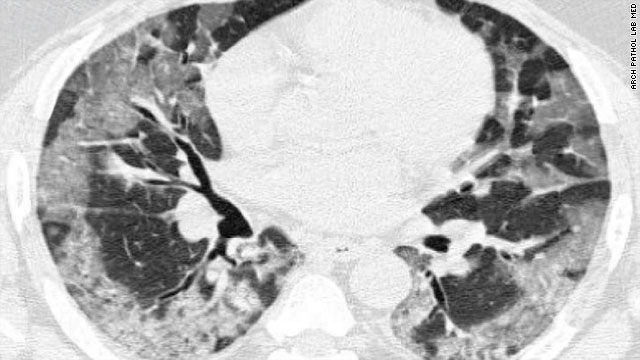 New York (CNN) -- In the rare cases when the H1N1 virus kills, scientists have found, it penetrates deep into the lungs, creating widespread damage -- a pattern similar to what killed millions during previous flu pandemics in 1918 and 1957.

The New York Office of Chief Medical Examiner examined medical records, autopsy reports and microscopic slides of 34 people with H1N1 who died between May 15 and July 9, 2009, during the early days of the pandemic.

The report found that among those deaths, inflammation and damage in the lungs extended all the way to the alveoli, tiny sacs at the farthest end of the lungs' airways.

"Generally, flu stays in the upper airways," said Dr. Anthony Fauci, director of the National Institute of Allergy and Infectious Diseases. "What this shows is clearly this virus has capability of infecting and causing inflammation and destruction of cells from the trachea, all the way down into smaller cells of the lungs.

"The cells of the lung get directly attacked by the virus," said Fauci.

The damage appears in computerized scans as opaque patches that normally would not appear in the lungs, and which obstruct lung function.

Get complete coverage of H1N1 -- Fighting the flu

Echoing previous reports, the study, published online in the Archives of Pathology and Laboratory Medicine, also revealed that 91 percent of those who died were people with underlying health problems, and most occurred in people between 25 and 49 years old.

More than half of the deaths were caused by bacterial pneumonia.

"The secondary bacterial infection evokes inflammation," said Dr. William Schaffner, professor in the Division of Infectious Diseases at Vanderbilt University School of Medicine. "It socks it in the lung and all of a sudden the lung as an organ can't do its principal job."

Obesity was a factor in 72 percent of H1N1 deaths, a finding that has caused concern among infectious disease experts.

"That was a striking finding," said Schaffner. "It contributes in a very material way to what we know about risks for a severe outcome with H1N1 infection. We are keeping an eye on obesity as a risk factor for H1N1 death."

Track the H1N1 virus in your state

The study gives interesting insight into the mechanism behind H1N1 deaths, but will not change the current response to the virus, said Fauci.