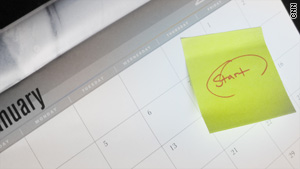 To follow through on resolutions, it's important to be realistic, specific, and accountable.
STORY HIGHLIGHTS

(CNN) -- A new decade is about to start, and you may be tempted to set a copious list of resolutions for yourself in order to broadly "make life better."

You may be thinking that you'll jump in on January 1 to reform everything from diet to relationships to personality.

That, experts say, is the wrong approach. It's great to want to make changes, but in order to actually accomplish your goals, they say, it's important to be realistic, specific, and accountable.

Here are 10 things you can do to help yourself stay in a mindset to make positive changes in the coming year:

If you want to lose weight, for example, change small aspects of your eating pattern. Resolve to have a salad tomorrow for lunch, and then do that for a week.

Write down the steps you want to take in a datebook to make it concrete, and reward yourself for making the individual changes, she said.

Now, you have specific aspects of that ideal of optimism to work toward. Pick one thing that the optimistic you is doing that you're not, and start working in that direction, she said.

Watch more on keeping your resolutions

Despite the proven health risks of certain habits, such as smoking, thinking about a habit in the negative will not help you nix it. Studies have shown that it's hard to get motivated about avoiding cancer, but easier to think about smelling better and saving money as reasons to quit smoking, Nolen-Hoeksema said.

So, if you want to quit doing something, think about the positive aspects of not doing it. And make sure you reward yourself for sticking to the plan along the way.

3. Look at the pros and cons

If you're on the fence about whether you should make a change this year, make a list of the benefits and costs, said Dr. Nadine Kaslow, professor of psychiatry at Emory University.

Pay attention to what's driving you, she said. Sometimes it's pain that motivates people to change, or a new phase of life, or new information, or a possible promotion.

4. Get a resolutions buddy

Knowing that someone else is working toward similar goals, or is supporting you in your endeavors, helps to keep motivation up. Having a new year's resolution buddy who's keeping track of your progress helps keep you accountable for what you've done.

At the end of every year, Kaslow and her friend review all of their goals from the prior year, examining what the obstacles were to change and then developing new goals for the next year.

Planning for goals with someone can guide you in the path towards change, even if you don't don't accomplish everything in a single year, she said.

It's easy to get discouraged by a broad goal like "I'm going to improve my marriage," Nolen-Hoeksema said. Figure out exactly what it is that's not working for you, and then formulate a strategy for solving individual problems.

In the marriage example, it's important to get realistic about what it is about your marriage that needs improvement. Then, spend some time keeping a diary and tracking what's going right and what's not, and come up with one thing you can do per week that would help the situation.

The process of assessing the small actions you can take in the immediate future, and savoring the positive effects, can take a lot of pressure off and help you achieve larger goals, she said.

The start of the year is as good a time as any to take inventory of yourself. What are your passions? What do you want to be doing better? Take the time think about who you are and how you want life to be, said Craig Levine, a clinical psychologist in San Francisco, California.

Real change happens because you yourself want it, not because others want it for you, experts say.

"If it's something that doesn't connect to you and truly relate to you, just because someone says you should do something, if it doesn't resonate with you, it's not going to be as helpful as something that truly fits you," Levine said.

Sometimes there are problems that need to be addressed before people can move forward with the change they want.

In some cases there are psychological impediments to making changes, Levine said. For example, some people fear failure so much that they unknowingly sabotage themselves. Self-esteem may also play a role -- some people don't feel they're worthy of being taken care of, he said.

If you think that there are deeper issues preventing you from moving forward in your life in some way, consult a mental health professional.

Having a long list of lofty resolutions can create anxiety, so Nolen-Hoeksema recommends choosing anywhere between three and five overarching things to change.

For Kaslow, the word "resolution" connotes a "pass-fail" ultimatum, so she prefers using the word "goal."

Writing down your goals and how you plan to achieve them is a good way to beat anxiety, Levine said.

Although you should be specific about what you want to do, sometimes it helps to broaden your vision of what you're trying to accomplish. For instance, if you've been laid off from your job in the financial sector, it may not be immediately possible to find a similar position.

But if you are on the job market, the broader goal might be to support yourself or your family, Nolen-Hoeksema said. Having a wider vision of what constitutes success can free you up to explore other options that do help with the central purpose.

"Step back and say, 'Is there any way I can achieve that bigger goal without getting fixated on the goal I had before?'" she said.

Changing behaviors is especially difficult when other people around you encourage habits you're trying to kick, or if you are under stress. For instance, if you're a recovering alcoholic and having a bad day, it might be hard to resist if someone says, "It looks like you need a drink," Kaslow said.

Know that there's going to be some anxiety, but be patient with yourself, Kaslow said. Take it one incident at a time, one day at a time.

"You have to deal with some negative consequences when you change, both internal and interpersonal, and environmental," she said. "You have to sort of get help dealing with those, and weather those storms."