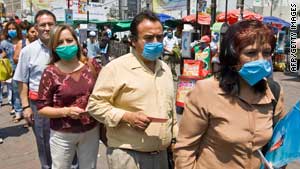 (CNN) -- It was the year that a new pandemic flu swept across the globe, initially baffling health authorities and causing worldwide panic.

It was also the year a new president and Congress tackled America's ailing health care system.

In the research world, the well-accepted notion that more cancer screenings benefit patients came under scrutiny. And a controversial stem cell policy was reversed.

And in the realm of food safety, Salmonella-tainted peanut butter products sickened and killed consumers across the nation and led to one of the largest food recalls in U.S. history.

Here's a closer look at five of the biggest health stories that emerged in 2009.

Watch more on the top health stories of '09

In April, the Centers for Disease Control and Prevention announced the detection of swine flu cases in the United States. When the 2009 H1N1 pandemic virus became widespread, massive confusion and panic ensued. Face masks and hand sanitizers sold out at stores.

Unlike the seasonal flu, most of the H1N1 deaths in the U.S. have been in children and younger adults, according to the CDC.

In June, the World Health Organization raised the alert to its highest level, stating that the H1N1 virus had spread to enough countries to be considered a global pandemic. In October, President Obama declared a national emergency to deal with the "rapid increase in illness" from H1N1.

But the panic eased after health authorities determined that the H1N1 virus appeared to be no more dangerous than the regular flu virus. Evidence also showed many of the seriously ill patients had underlying medical conditions.

Since the pandemic began, 50 million in the United States have been infected. The CDC estimates about 200,000 hospitalizations and about 10,000 deaths from H1N1.

A vaccine created this year, which public health authorities say is the best way to protect against H1N1, was made available to the public this fall.

Obama made health care reform a top priority on his domestic agenda and urged Congress to pass such a bill, sparking months of political wrangling.

The health care reform bill, if it passes into law, would be the biggest expansion of federal health care guarantees since the enactment of Medicare and Medicaid. It would extend insurance coverage to an estimated 30 million additional Americans. Among other things, the House and Senate bills -- which still need to be reconciled -- require individuals to buy health insurance and limit insurance companies from denying coverage for pre-existing conditions.

As the cost of health care skyrockets in America, supporters say reform would slow this economic burden. But critics voice concerns about the reform's impact on the existing health care system and its cost. Those anxieties flamed protests and contentious town hall meetings around the country.

Liberal members of the Democratic Party said the Senate bill has been too watered down. Meanwhile, Republicans slammed both versions of the bill, saying it will raise taxes while doing little to slow spiraling health care costs; they have labeled it "a monstrosity."

A conference committee will convene to iron out the differences between the two versions in January.

The medical establishment raised questions about certain cancer screening tests that for years people were told were a necessity.

In November, a government task force recommended that women in their 40s not get routine annual mammograms. It advised women between 40 and 50 to discuss with their doctor the benefits and harms of having a mammogram, since these tests could result in false positives, anxiety and unnecessary biopsies.

The change in the task force's guidelines triggered confusion, outrage and accusations of health care rationing. Cancer survivors and patient advocate groups said that routine mammograms save lives. A spokeswoman for the task force later said the guidelines had been communicated poorly to the public.

For men, a decade-long study found that prostate cancer screenings led to more diagnoses but did not reduce the number of deaths.

Since the early 1990s, controversy around annual prostate screening has persisted in the medical community. Some doctors and medical organizations are skeptical of the screening, citing lack of scientific evidence that it saves lives and the risk of common treatment side effects, including impotence and incontinence. Doctors say that more research is required and that there's no definitive answer on prostate screenings yet.

Some scientists believe embryonic stem cells could help treat many diseases and disabilities, because of their potential to develop into many different cell types in the body.

While some advocates praised the executive order as a a giant step forward for medical research, conservatives groups objected, contending that the destruction of human embryos ends human life.

Salmonella-tainted peanut butter paste -- found in crackers, cookies, ice cream and snack items -- sickened more than 600 people and killed nine in the United States. The outbreak, which came to light in January, was traced back to a processing plant in Blakely, Georgia, owned by Peanut Corp. of America. A second PCA-owned plant in Plainview, Texas, was later raided and shut down by state health officials for health violations.

The outbreak led to one of the largest food recalls in U.S. history, involving more than 1,000 products. A Food and Drug Administration report said Peanut Corp. of America shipped a tainted product it knew had tested positive for salmonella. The company filed for bankruptcy in February.

The outbreak renewed criticism about the lack of food safety oversight in the country.