Trying to lose weight? Watch what you drink 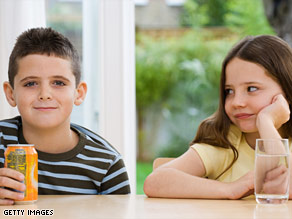 Liquid calories are not as satisfying as solid food and they generally lack any nutritional value.

75 percent of U.S. adults are projected to be overweight or obese by 2015, according to researchers. Americans consume anywhere from 150 to 300 more calories than they did three decades ago and half of those calories come from liquid. A new study out of John Hopkins Bloomberg School of Public Health finds that reducing liquid calories, especially from sugar-sweetened drinks such as punches, fruit juices and sodas, helps people lose weight and keep it off.

Question: Why the emphasis on liquid calories?

Americans consume more liquid calories now than they ever have before. But unlike calories from solid food, it's much harder for people to track how many calories they consume from drinking. The human body's systems for regulating hunger and food intake are complex. But scientists do know that the lack of physiological and environmental cues associated with drinking, like not having to chew or prepare a drink like you prepare a meal, play a role. For these reasons, liquid calories don't keep a person full and they are not as satisfying as solid food. They are usually "empty calories" as well because they generally lack any nutritional value.

Watch more on the dangers of sweetened drinks »

Question: Are healthy drinks like smoothies and teas a better option when trying to lose weight?

Not really. As one dietitian CNN spoke to phrased it, "A calorie is a calorie is a calorie, no matter where it comes from." Many of the "healthy" drinks on the market today are loaded with sugar and various sweeteners. Drinking a 16-ounce fruit smoothie may seem like a healthy choice but it could have almost 300 calories in it that you might not account for somewhere else in your diet. Teas, fruit juices, shakes and fortified waters are all great examples of seemingly healthy drinks that can be loaded with calories.

Background
CNN spoke to Dr. Benjamin Caballero, the study's senior author and a professor with the Bloomberg School of Public Health at John Hopkins; and with Dawn Jackson Blatner, a registered dietitian and a national spokeswoman for the American Dietic Association.

• For consumers who read nutrition labels, the main thing to pay attention to is the calorie count, not the list of ingredients. All the different sweeteners have roughly four calories per gram, so their value in terms of calories is identical. Then you look at the size of the drink; a can of a regular soda may have 160-180 calories per can. This range varies very little whether it's sweetened with high fructose corn syrup or something else.

• Any calories a person removes from his diet will help him lose weight. A person trying to lose weight should ask, "What are the calories that are giving me the least amount of nutrition?" Those need to be cut out or reduced. Look for the least satisfying and least nutritional calories and cut those first.

• If a person consumed 500 extra calories every day, seven days a week, he would gain at least one pound a week.