NBA star strives to be the role model he always needed

(CNN) -- Sports stars seem to have it all -- from seven-figure salaries to big endorsement deals. But lately, what some don't have is a good reputation. 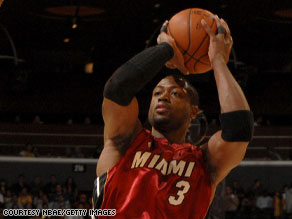 With the steroids controversy in baseball and drug allegations against the world's greatest swimmer, many adoring fans may wonder, "Where are the good guys in sports?"

Dwyane Wade of the Miami Heat is one of those good guys. He stays out of the controversy and insists that his fame should be used to help others.

CNN's Nicole Lapin talked to the NBA star about the foundation he started and his partnership with National Recess Week. The following is an edited transcript of the interview.

Nicole Lapin: It feels like you're getting paid for recess now. You're 27 years old. Do you look at your paycheck sometimes and are like, "I get paid for this?

Lapin: Some people see you as the role model. Who was your role model growing up?

But, you know, on a personal level, I always looked at people that were close to me that were doing things. My sister was always a role model to me, just because of the way that she always helped kids. And even though we didn't have much, she always helped the ones that were less fortunate than us. And it's something that just stuck with me. And it's something that I'm trying to do now.

Lapin: So, as a role model, to take little kids wearing your jerseys and playing video games of you, do you take that seriously?

Lapin: In 2003, you started Wade's World to help those kids, to talk to those kids. Because you were never talked to when you were growing up.

Wade: Yes, yes. I never was. It may have helped me out; helped my drive out. But unfortunately, I've never had anyone come to the community I grew up in and give out that helping hand. And to give us hope, in our community, that we can do something special. I always heard that we couldn't or you know, it's one in a million or something like that.

Well, our job and my job at the Wade's World foundation is to go out and let these kids know that we believe in them. And there's more than what you see out your front window or your front door that's in life. And you can do anything you want.

Lapin: You said on your bio that you want to leave the world a better place. You think you've done that?

Lapin: What do you want to do?

Wade: I think the main thing you think of is to know you can change the whole world, but you can touch many people on the way. And my main thing is like, when I go out and talk to kids or I do different events through my foundation, I just want to change one person's thought in that room. They had a negative thought or belief coming in, I want to make them believe. And if I can change one kid's mind, he can change someone else's mind, and it can be a chain effect that can continue to keep going.