(CNN) -- Roll out the pink carpet, grab a feather boa and throw open those Malibu Dream House doors. It's Barbie's 50th, and the iconic doll, unveiled today in her latest swimsuit, has plenty to celebrate. 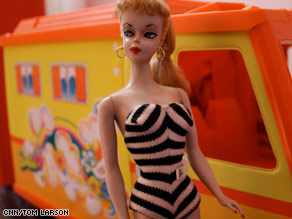 The classic 1959 Barbie strikes a pose in front of an early Malibu Barbie Camper.

Only this American institution could have inspired Barbara Karleskint, 48, to spend nearly $700 so she and one of her dolls could wear matching red chiffon gowns and capes at an annual collectors gathering.

"Look, we're not as bad as the Star Trek convention people," Karleskint, who lives outside of Orlando, Florida, said with a laugh. Collecting Barbies "brings me joy; that's all I can say. And life's not worth living unless you have some joy."

With 8 million active collectors dotting the globe, according to Mattel, Karleskint is hardly alone.

Since Mattel introduced Barbie in 1959, she has become a household name -- owned by 90 percent of American girls ages 3 to 10 and sold in 150 countries, said Lauren Dougherty, a Mattel spokeswoman. Barbie attracts 50 million visitors to her Web site each month, she added.

See Barbie dolls from all over the world »

Along the way, she spawned a cosmetics line, apparel stores throughout Asia and an entertainment franchise that has sold more than 65 million DVDs.

Last week, a six-story flagship store opened in Shanghai, China. And a real-life Malibu Dream House, a temporary home tricked out for Barbie's birthday -- including a chandelier made of her hair -- is currently on display in California.

Not bad for a doll that, according to author Robin Gerber, was initially inspired by "a sexually-themed gag toy for men."

The now-legendary doll was conceived by Ruth Handler, a daughter of Polish immigrants, said Gerber, author of the newly published "Barbie and Ruth: The Story of the World's Most Famous Doll and the Woman Who Created Her." She and her husband, Elliott, owned Mattel until a scandal involving accusations of cooked books drove them out in 1975, Gerber said.

Handler, who died in 2002, used to watch her own daughter, Barbara, play with paper dolls. Then, on a trip to Europe, Barbara became fascinated with a buxom doll that Gerber said was based on a female German cartoon character, named Lilli, who used sex to get what she wanted.

"My guess is she didn't know what it was when she bought it," because at that point, four years after the Lilli doll's release, it had landed in European toy stores, the author explained. Handler took the doll back to the states and insisted Mattel designers get to work.

"Who would have thought," Gerber said. Barbie was thought up by a woman and modeled on a cartoon character "who was essentially a prostitute."

Though the men at Mattel, a company that had never sold dolls before, were skeptical at best, Handler proved to be "a corporate genius," Gerber said. In the three years after Barbie's release, Mattel's worth grew to $200 million, doubling the value earned in the first 20 years of business.

Handler's daughter, now Barbara Segal, 67, is a bit dumbfounded by all the hype.

"It's been quite an interesting ride," she said from her Los Angeles, California, area home. "I can't believe this doll's created all of this."

Barbie's collector line (not what's seen on Wal-Mart shelves) is designed for the grown-ups who still relish Barbie. Many say Barbie is an antidote to adult woes, allowing them to recapture their youth and revisit simpler times. iReport.com: See, share Barbie collections

The woman behind Sandi Holder's Doll Attic in Union City, California, strolled through her 3,000-square-foot warehouse and one-of-a-kind Barbie museum, home to thousands of dolls, and spoke of the visitors who flock through her doors each year.

She says the doll can evoke powerful emotions and has seen visitors weep for a lost sibling or childhood friend. But Holder, 51, who gave up a nursing career to pursue her Barbie dream more than 20 years ago, said that while trips to the museum can be emotional, they're also full of laughter and stories.

"No one leaves without sharing a fond portion of their childhood with me," said Holder, who once snagged a record for selling a doll at auction for $27,600.

Barbie, however, doesn't conjure up smiles for everyone.

Though the 11.5-inch doll can't be single-handedly blamed for the eating disorders and body-image issues that plague young women, Ellyn Kaschak, a psychology professor at San Jose Sate University in California, said Barbie, especially given her prevalence, is part of the problem.

"I don't think the concerns are overblown at all," said Kaschak, one of the founders in the 1970s of the feminist psychology field. "Blow her up to normal [human] size, and she'd fall over," she said of Barbie's unattainable figure.

Still standing, however, is Cindy Jackson, a 53-year-old woman inspired by Barbie to do much more than collect dolls and splurge on matching outfits.

Over the course of more than two decades, Jackson has gone under the knife for 13 full-scale operations, including multiple procedures each time, and hundreds of less intrusive cosmetic tune-ups in order to achieve the "all-American beauty" look she said Barbie represents.

She grew up in rural Ohio, "plain and unpopular," she said. "Every real woman around me was a farmer's wife, a factory worker, a mother or a school teacher. ... For me, it was soul-destroying. There was no glamour whatsoever."

And then she met her first Barbie, a vintage doll sporting a bubble cut, "a sidelong glance" and dressed as Jackie Kennedy, she remembered.

"It was powerful," Jackson said from her London, England, home. "I'd never seen a real woman who looked like that, and I thought, 'That's what I want to look like.' "

Concern about Barbie's looks and her values, including materialism -- she has worn about 1 billion outfits, Mattel's Dougherty said -- has at times gained ire from more than feminists and psychologists. The recent release of Tattoo Barbie, for instance, has gotten under the skin of some parents.

Watch video about the controversy »

But such criticism misses the point of what Barbie is all about, according to diehard fans. iReport.com: Barbie's body is not the issue

"It's not about wanting to look like her. It's about imagining what could be," said Nancy Parsons, of western Pennsylvania, who is chairwoman of the Barbie 50th Anniversary Gala, this year's collectors convention planned for July. "People who say it's a bad influence -- they don't know the imagination that goes into playing with dolls. ... My sister always pretended she was a nurse, and [now] she's a nurse."

All told, Barbie has held down 108 careers, Mattel says. She's been a police officer, a doctor, a veterinarian, an astronaut and a presidential candidate.

Women, by the way, are not the only ones drawn to Barbie. Up to 20 percent of annual convention attendees, who fly in from all over the world, are men, this year's chairwoman, Parsons, said. In her own collector's club there are two of them: "One's a hair dresser, and one's an auto mechanic," she said.

The "novice fashion fan," as he described himself, has been collecting Barbies for about 14 years and counts among his favorites his Versace Barbie, Ralph Lauren Barbie and Diane von Fürstenberg Barbie.

"I know there's no way I can afford a designer's original, but I think it's cool that my Barbies can," he said.

Barbie has had a long partnership with top designers, 50 of whom jumped at the chance to participate in the Barbie Runway Show in New York last month, bringing life-sized Barbie fashions to the catwalk.

"A lot of them say she was their first client, the first model they dressed," said Mattel's Dougherty. "We thought it was the perfect place to kick off her celebration."

All About Barbie Dolls • Mattel Inc.