Humbled banker parts with yuppie past 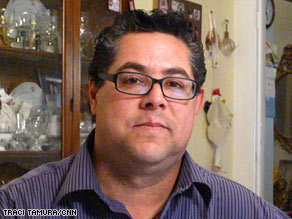 Ernie Casillas says that being unemployed has grounded him from his high-flying days in the banking sector.

But with the banking industry in crisis, his job is gone -- as is his lavish lifestyle. Desperate for work, he recently swallowed his pride and posted a message on Craigslist: "Unemployed I need a job."

"It took a lot for me to put that ad on Craigslist, because I had to change what I was before," he said, breaking down in tears. "I wasn't this rich little yuppie anymore, driving expensive cars, having expensive suits. I'm in this just like everybody else looking for work. It humbles you. This is real."

Casillas, 46, is like tens of thousands of out-of-work Americans turning to Craigslist, the online classified ad Web site where people can post information for free.

The site says it has 50 million users, most of them in the United States. More than 2 million new jobs are posted each month, according to Craigslist.

Many have begun posting messages of desperation seeking work. Some post their résumé and phone number; others swap goods online. iReport: Tell us how you're getting by

Casillas said it was a humbling experience to finally post his message on the site. Once responsible for bringing in $400,000 in cash per month for a credit union, he has been out of work for the past four months and now lives with his mother in suburban Los Angeles.

He had tried newspaper ads and other online job sites, with no great success. Then one night, he posted a simple message on Craigslist.

Watch as jobless search for work, food, clothes on the Internet »

"I have over 20 years of experience in sales, telephone sales in a call center, customer service, administrative assistant, cash handling, teller, and many more skills and abilities. Great personality, very friendly, hard worker, very responsible," it said. "I will be happy to e-mail you my resume. I need a job now. Please call my cell phone."

Watch a humbled banker describe "this is real" »

Casillas said he teared up when he first began typing the message -- that his life had come unraveled so hard and so fast. But ultimately, he said, he decided, "I'm just going to put it out there. I'm not going to be embarrassed. I'm just going to tell the whole world: I'm unemployed, and I need a job today. And the response was great."

Need a job? See job fairs in your region »

The whole experience has given him a dose of humility. He is a self-described former yuppie going through turbulent times. When he sees homeless people these days, he wants to help them.

The son of a Mexican immigrant, Casillas says, he was successful, making about $70,000 a year in the banking industry.

Adding to his hard times, he and his wife have recently separated.

How good were things just a few years ago?

"I was just living a very good life," he said. "My daughter would ask me to take her to Las Vegas for her birthday, and we would stay at the most expensive hotels. Every year, this is what she wanted."

His daughter is now 11. He takes her to the mall every now and then. They don't buy anything on the trips, he says. He tells her, maybe next time.

He says that living with his 75-year-old mother has helped ground him again. "She has brought me down to Earth, being very humble."

Across town, in the coastal community of Redondo Beach, Craigslist and the down economy have brought together two strangers.

Jill Gardner has been unemployed after being laid off from her job at a refinery in June. She's now trying to get into the hospitality field, but with her cash running low, she couldn't afford new clothes for job interviews.

So she posted a message for clothes.

"I just decided to swallow my pride and try it and see what happens," she said. "It's not easy, because I've never had to ask for things like that before, and it's hard not to provide for myself."

She said some creepy men called saying they would buy her clothes for "favors." However, two women responded with genuine help. One of those was Bonny Sue Robbins, a paralegal who brought Gardner an array of business suits, cocktail dresses and summer clothes.

"I felt that I owed it to another sister to help her on her way. I also was struck by the positiveness of her request. It wasn't just 'give me, give me.' It was 'help me help myself,' and I thought that was worth rewarding," Robbins said shortly after handing over the goods.

Robbins said that a few years back, she went through a tough divorce. "I was lucky that there were people there when I needed it, and I feel it's kind of my chance to pay back."

Both women hugged before parting. "You're an angel," Gardner said.

Robbins responded, "We'll keep in touch so that I can go out and celebrate when you get your new job."

Back at her home, Gardner tried on one of her new business suits.

"I'm very grateful," she said. "I'm just going to go forward with my plan and get a job."

CNN's Traci Tamura and Gregg Canes contributed to this report.

All About Craigslist Inc. • National Economy