(CNN) -- Jim Vincent loved everything about his 1972 Plymouth 'Cuda. The purr of its V8 engine. The way the sun danced off it after a spit-shine wax. Whenever he revved the engine, he also thought about his father, who first brought home one of the muscle cars more than 30 years ago. 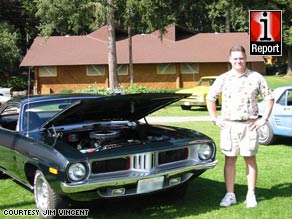 Jim Vincent has had to sell his beloved 1972 Plymouth 'Cuda after being laid off. "It still stings," he said.

"From that day forward, I would not stop thinking about that car," Vincent wrote on iReport.com.

Vincent finally got a 'Cuda of his own in 1999. But last year he was laid off from the airline industry. And after months of internal turmoil, he reluctantly -- begrudgingly -- put his gray Barracuda up for sale, the same car that's brought so much joy over the years.

"It still stings to have to part with one of my dreams through no real fault of my own," Vincent said. "I have always been a frugal guy and have never lived a lavish lifestyle. I live in a modest home, and I am current on my mortgage and buy from Craigslist whenever possible, but it is getting thin!"

Vincent was just one of the iReporters who shared stories of prized possessions they were forced to sell due to hard economic times. The items range from beloved cars to jewelry to autographed sports memorabilia. In many cases, these Americans described parting with something so cherished that it almost felt as if they were losing part of their souls. iReport.com: "Brother, can you spare a muscle car?"

iReporter John Krix, 45, began playing the violin at age 5. The son of a symphony musician, he's felt a special attachment to his instruments over the years. But when he couldn't afford to pay his bills, he had little choice but to start selling them, one by one.

"It felt horrible. The first violin that I sold was actually a violin that I had played on for 15 years," he said. "It was a real downer. I knew I had to get rid of it because we were struggling financially."

He added, "I have sold all of my good instruments, including three violins and two bows worth over $20,000 at less than half their value just to get quick sales to feed my family and pay rising fuel and property tax costs."

Watch how violin saved his father's life in Siberia »

Krix, who has been teaching music to elementary and junior high school students for the past 20 years, has no idea how much he will eventually have to sell.

"Right now we're pretty strapped, some medical bills, credit cards," he said. "I'm hoping within the next three years we'll be able to get better." Selling instruments is "the only thing that's keeping us afloat." iReport.com: "Selling my everything"

Shawn Adelwerth, who served in the Army in Kuwait, was laid off from his job in December and immediately started cutting costs. "I stopped going out to eat and started eating peanut butter and jelly regularly," he said.

Adelwerth had no luck finding a job, and within weeks, he started selling more and more items online. "I started dropping prices really low just to get some cash for my bills and to eat."

At the start of March, he found himself broke and unable to pay the rent.

"The person I am renting from told me it was nothing personal, just business," he said. Now he is homeless, and many of his possessions have been sold. "The only things I have left are some clothes, my laptop, which I may sell, and my cell phone," he said. "The last item I sold was my 2004 class ring. I ended up getting $160 for it, even though I paid about $600 for it." iReport.com: "Sold everything, still homeless"

Like Adelwerth, other iReporters were taking any amount of money they could.

Tracie Setliff was in bad financial shape during her divorce proceedings. She had no car and was forced to rent one to drive to work, leaving her with little money to pay the rent at the start of March. She had to pawn her year-old $1,500 wedding ring for only $100. She said she was "disgusted" that she could only receive that much money for it.

"I plan to buy back my wedding ring at an exorbitant interest rate and put it on eBay to help offset my mounting legal expenses," she said. "If I do well enough, I may put some additional items up for sale to make ends meet as a single woman with limited means."

Other iReporters were forced to sell items that reminded them of their childhood. Eric in Whittier, California, collected baseball memorabilia throughout his youth.

"I still have a small collection of stuff," he said. "But my favorite was always meeting Mickey Mantle and getting his autograph."

Eric will never forget shaking the baseball legend's hand and watching him sign that autograph. "I have had the signature since 1991, when I was 16 years old, and always envisioned putting the signature in some sort of den or game room."

But he recently separated from his wife and had to take a 10 percent pay cut as an employee of the state of California. He decided to put the cherished Mickey Mantle autograph up for sale online. He secretly hoped it wouldn't sell, but it did -- for what he felt was a measly $250.

"I don't think any amount could satisfy me," he said.

To this day, he deeply regrets selling the photo.

"With baseball in such turmoil these days, that autograph always reminded me of my younger days, when baseball seemed a whole lot more pure and accessible," he said. "The $250 I received in return won't really help much in the big picture." iReport.com: "No matter how bad things may get, I still should have kept it"

Joe Renzetti of Columbus, Ohio, feels differently about selling his prized item: a full-scale replica of a stormtrooper costume from "Star Wars" that he made.

"The last time I wore it was in the Tournament of Roses parade in Pasadena, when I marched with George Lucas," he said. He sold it once he got married to pay the bills.

Despite the fond memories he has of his costume, he has no regrets. It sold for $700 on eBay, and combined with three other costumes that went up for sale, he made thousands of dollars.

"It was a shame to part with them after so much work creating them, but I don't miss them too much," he said. "I got my use out of them and moved on." iReport.com: Sci-fi/fantasy costumes sold for thousands

But others miss their cherished possessions. In the case of Vincent, he is able to put his situation into perspective.

"I know I am so much more fortunate than others right now. It is just a car," he said. "But it still stings to have to part with one of my dreams."