JACKSON HEIGHTS, New York (CNN) -- Every day, unemployed men gather under the elevated 7 train in Jackson Heights, Queens. Many of them are homeless. All of them are hungry. 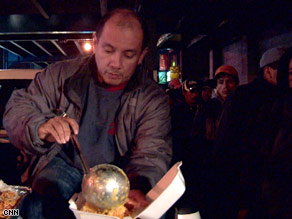 At around 9:30 each night, relief comes in the form of Jorge Munoz's white pickup truck, filled with hot food, coffee and hot chocolate.

The men eagerly accept containers of chicken and rice from Munoz, devouring the food on the spot. Quiet gratitude radiates from the crowd.

For many, this is their only hot meal of the day; for some, it's the first food they've eaten since last night. Vote now for the CNN Hero of the Year

"I thank God for touching that man's heart," says Eduardo, one of the regulars.

Watching Munoz, 44, distribute meals and offer extra cups of coffee, it's clear he's passionate about bringing food to hungry people. For more than four years, Munoz and his family have been feeding those in need seven nights a week, 365 days a year. To date, he estimates he's served more than 70,000 meals.

Watch Munoz describe how his work is a family affair »

Word of his mobile soup kitchen has spread, and people of all backgrounds and status now join the largely-Hispanic crowd surrounding his truck -- Egyptians, Chinese, Ethiopians, South Asians, white and black Americans and a British man who lost his job.

"I'll help anyone who needs to eat. Just line up," Munoz says.

And at a time when food banks are struggling to keep up with skyrocketing demand, he's never been needed more. But for Munoz, a school bus driver by day, this work is a labor of love.

"When I see these guys on the street," he says, "it's like seeing me, 20-something years ago when I came to this country."

Munoz was born in Colombia and his father died in an accident when he was young. When his mother found it difficult to support Munoz and his sister, she made her way to New York, finding work in Brooklyn as a nanny. At her urging, Munoz followed in her footsteps, coming to the United States in the 1980s.

"She said this was a better future for us," he says.

Munoz obtained legal residency in 1987 and later became a citizen, along with his mother and sister. He never stood on a street corner to find work, but as an immigrant, he identifies with many of the men he feeds.

Munoz began his unorthodox meal program -- now his nonprofit, An Angel in Queens -- in the summer of 2004. Friends told him about large amounts of food being thrown away at their jobs. At first, he collected leftovers from local businesses and handed out brown bag lunches to underprivileged men three nights a week. Within a few months, Munoz and his mother were preparing 20 home-cooked meals daily.

Numbers gradually increased over the years to 35 per night, then 60. In recent months, that number has jumped to as many as 140 meals a night.

Sustaining this endeavor consumes most of his life. To his mother's dismay, his family's Woodhaven home is bursting with goods related to this work. An oversize freezer takes up most of the dining room, and the porch is lined with canned food and paper products.

Daily operations now run like a well-oiled machine. Munoz gets up around 5:00 a.m. to drive his bus route, and he calls home on his breaks to see how the cooking is going. When he gets home around 5:30 p.m. -- often stopping to pick up food donations -- he helps pack up meals before heading out to "his corner" in Jackson Heights.

"He comes here without fail," says one of the men. "It could be cold, it could be really hot, but he's here."

On Saturdays he takes the men breakfast, and on Sundays -- his "day off" -- he brings them ham-and-cheese sandwiches. It's a relentless schedule, but either Munoz or his sister does it every night of the year.

With the economic downturn, donations have slowed as the crowds awaiting Munoz's arrival have grown. But he is determined to do all he can to meet their needs.

Munoz estimates that food and gas cost approximately $400 to 450 a week; he and his family are funding the operation through their savings and his weekly $700 paycheck.

Asked why he spends so much time to help people he doesn't know, he answers, "I have a stable job, my mom, my family, a house... everything I want, I have. And these guys [don't]. So I just think, 'OK, I have the food.' At least for today they're going to have a meal to eat."

Want to get involved? Check out An Angel in Queens and see how to help.