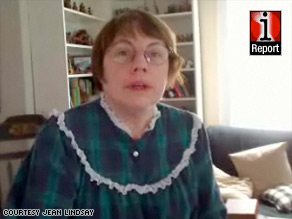 Jean Lindsay records a video telling people to get out of their nightgowns and look for work.

(CNN) -- Jean Lindsay, a spunky 67-year-old with two masters' degrees, panicked after she failed to land a job in the garden center of a Lowe's home-improvement store.

She started to wonder whether a woman of her age ever would be able to find work. She worried about her debt, and weeks of unemployment were turning into months.

After the job interview, she stayed up most of the night in the fits of an anxiety attack -- vomiting and huddling under the bedcovers with her two dogs.

"God, I felt like I was falling off the ends of the earth," she said.

A few days later, though, she tossed on a red sweater, plopped down in front of her computer, flipped on her Web camera -- and, suddenly, while streaming her story onto the Internet, things seemed OK.

For Lindsay, like many people these days, the Internet has become both a tool for economic recovery and a cure for isolation. iReport.com: Share your survivor story

At a time when the U.S. Bureau of Labor Statistics says that 1.07 million people 55 and older are unemployed and looking for work, the Internet is an increasingly useful tool for older people looking for jobs and a sense of community, said Deborah Russell the AARP's director of workforce issues.

"It's a great way of being able to network with people who are either in a similar situation or who may have some resources to help you," she said.

The number of people who need this help is on the rise. Some older people are delaying retirement because of the economic recession; and, according to an analysis by the AARP Public Policy Institute, those who are looking for work typically search for about a third longer than people younger than 55.

Watch how one senior goes back to school for a living »

Lindsay had been out of work for about three months before her brother gave her a Web camera for Christmas last year.

Almost immediately, she was hooked.

Her brother intended her to use the Web cam mostly to communicate with family members who are spread out across the country, she said. But Lindsay didn't stop there. She got a creative jolt from filming quirky videos of her own. So, she started posting video monologues for the Internet world to see.

In the past three weeks, she's posted nearly 40 videos on iReport. Her most popular video -- in which she talks about depression while wearing a plaid nightgown -- has been viewed by more than 140,000 people.

"I was in my nightgown at noon, and I wasn't getting at the job search very fast, and I thought, 'this is instructive,' " she said, laughing.

She signs off from the video simply: "Get up, and get out!" Watch Lindsay's tips for getting out of the house

Her own advice compelled her to do the same.

Lindsay says sharing her failures as well as successes online is cathartic, but she also hopes it's helpful for people in similar circumstances.

She's not shy about saying that she suffers from mild bipolar disorder. This economy can push people into depression and mental illness, she said, and she wants people to know they're not alone.

The same goes for her job search.

"This has really invigorated me," she said of her forays with a virtual persona. "It's something where I've had success. And the job search is not always successful -- it's dealing with a lot of rejection, especially when you're older."

On iReport, Lindsay posts under the name "infoaddict," which seems fitting for a former librarian and information technology expert with masters' degrees in literature and library information sciences.

Like a good book, Lindsay says the Internet also opens new worlds for her.

While she's not sure exactly how, she has a sense that all of her online storytelling will help her in the job search. If nothing else, the online videos market her computer skills, she said.

Dan Beach, Lindsay's second cousin, who lives in Florida, said Skype, social media sites and online video have been "a salvation" for Lindsay. "Frankly, I think she was very, very depressed. And I think this has brought her out enormously," he said.

The 72-year-old added: "It helps an older person feel younger because there is so much youth [online]. I've done the Facebook thing in the past couple of months myself."

"She's gotten so much response to it, and I'm wondering whether she might try to make something out of that," he said. "She's just the dotty aunt enough to be able to do that kind of thing. She's a charming person." iReport.com: Send us your job hunt stories

Lindsay, who said she needs a job because she has home-improvement debt and can't sell her house in this slumped market, said she is able to keep hunting for jobs partly because of her creative outlet online.

She grew up loving to help her grandfather on his farm. Together, they would build manure loaders and chicken pluckers -- machines Lindsay found fascinating.

Those experiences translated into her love for hardware stores, gardening and gadgetry.

"I love hardware stores, so Lowe's would have been perfect. I'm just a crazy old lady, I've just got catholic taste," she said.

But she believes that something better than Lowe's is out there. She plans to apply to an office-supply store, an electronics store and for a telecommunications job she could do from her home in western New York.

"There is a real Catch-22 for people my age who are still hale and hearty and still have some talent left. We're probably fooling ourselves that we can go on and do anything," she said, "but we can't live that way."

Her online life helps ensure she won't have to.