Forget the G-20, what are the spouses wearing? 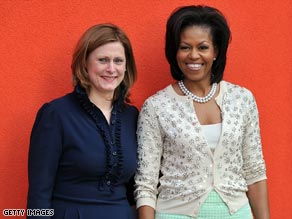 The designer specially made the dress in navy for Brown, but retails the garment in black for $720, Lintner said.

Brown also wore a pair of Astley Clarke earrings, according to a spokeswoman from 10 Downing Street. The Astley Clarke Web site sells earrings from less than $100 to more than $10,000.

The first ladies' choices of outfits during this summit are being closely watched by the world's media, both in terms of style and comparative cost.

Both women pay for all of their clothes themselves and receive no clothing allowance, according to spokeswomen for both sides.

Lintner first designed a dress for Brown for the British Fashion Council Awards in November 2007, Lintner said. She sells to clients only through her West London studio and said she started her company out of frustration over the selection of workwear available for women. Although the clothes are expensive, she said, they are made to last.

This is not the first time Michelle Obama has chosen an "off the rack" outfit. She has worn J.Crew before, including in American Vogue.

When appearing on "The Tonight Show" with Jay Leno, she wore a J.Crew ensemble, on which she commented, "You get some good stuff online."

After the photo call, Obama and Brown visited Maggie's Cancer Caring Center, where Brown is a patron.

The spouses of the G-20 leaders have several events scheduled during their stay in London. On Tuesday, Brown will be host of a dinner for G-20 spouses.

The dinner will take place at No. 11 Downing Street, the London residence of the chancellor of the exchequer, while the G-20 leaders take a working dinner next door at No. 10.

As well as the spouses of the G-20 leaders, prominent women in British sport, arts, fashion, charity and business are also expected to attend. Downing Street has said those invited are "all intended to show off British talent."

The spouses also will visit the Royal Opera House in Covent Garden, London. They are expected to watch some short performances of opera and ballet, the Prime Minister's Press Office said.