PACOIMA, California (CNN) -- Father John Lasseigne has never owned a home, but he's become one of the key saviors for those who face losing their house. As banks move in to take over homes in foreclosure, this priest is stepping in to stop them. 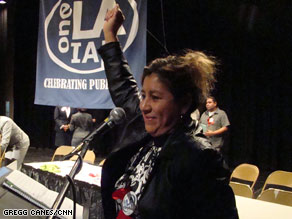 Juana Rodriguez and other residents of Pacoima, California, have begun rallying to try to save their homes.

"When I first arrived in the church, at the end of Mass, a family came to speak with me and said, 'Father, would you pray for us? We are about to lose our home,' " Lasseigne said. "Suddenly, the crisis became very real and personal for me."

Lasseigne is the priest of Mary Immaculate Catholic Church in the Southern California community of Pacoima, where one in every nine homes is in some stage of foreclosure. He says the people in this community were targeted by predatory lenders and given loans they never should have qualified for.

"Many of them were lured into taking out mortgages that had very small interest payments in the beginning, which then ballooned into much larger payments later," he said.

Lasseigne began to preach to his congregation about the power of community organization. He teamed up with the One LA community group, and together they started teaching Foreclosure 101 to his flock.

"There are hundreds, if not thousands, of families in my immediate neighborhood at risk of losing their homes," he said.

CNN has a new series to help you take control of your job, money and home!
Thursday, starting 6 a.m. ET

Scores of families descended on a local high school for a recent community meeting to discuss the foreclosure crisis. Local politicians, as well as lenders, were present at the event, which began with a teenage girl praying for help to "stop foreclosures, which put us and so many other kids at risk of losing our homes."

Luis Dimas stood with his family and told the crowd he has been trying to negotiate a long-term loan modification for months. "Our payments went from $2,800 a month to $4,800 a month -- and the American dream turned into a nightmare."

These stories were repeated time and again from people like Juana Rodriguez, who has a high-interest subprime loan, and Juan Carlos Jacobo, whose home is about to be sold off to the bank.

Jacobo says it's important for lenders to witness standing-room-only community events. "They see we're not alone, that we are fighting for our homes," he said.

"We all know that these are uncertain times for hundreds of people gathered here today who are threatened with the loss of their homes," said Yvonne Mariajimenez, an attorney with the nonprofit Neighborhood Legal Services of Los Angeles County. "Hundreds more work for wages that do not provide a family income."

Democratic U.S. Rep. Howard Berman told the crowd that hearing their stories was "just another reminder of that which I already knew": that the government needs to do more to help people facing foreclosure.

Find out more about help for homeowners »

"I will work very closely with you to make it a reality," he said.

Many of the home owners here, with the help of Lasseigne and One LA, will receive finance preparation to better understand the fine print on loans. Lasseigne says that sometimes, people here didn't know what they were signing onto when they got loans.

He describes his community as a "working-class neighborhood with a lot of immigrants, but also a lot of families that have been here for generations."

He's met with more than 300 residents in recent months and brought them together with banks to modify their loans.

Lasseigne describes himself as a man who carries God's message and who gets involved with the "social needs of my people."

"I believe that many of these families have been taken advantage of and been the subject of financial entrapment," he said. "The church is concerned about the health of its community, and if the community is going through an upheaval and many families are being dislocated, we have to respond."